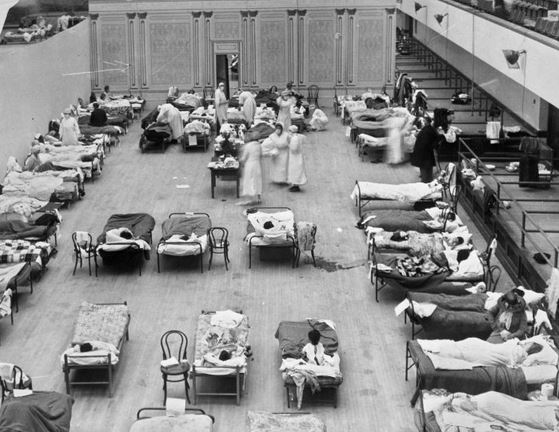 So many years ago, a long time before the coronavirus, another pandemic killed about 500,000 Nigerians.

Another pandemic 102 years ago: Volunteer nurses from the American Red Cross tend to influenza patients in the Oakland Municipal Auditorium

In 1918, a pandemic virus, called the Spanish flu blew across the world like the current coronavirus and killed at least 50 million people. In Nigeria, then under colonial rule, an estimated 500,000 died.

There is a striking similarity between the two pandemics in the way they affected Nigeria: both were brought in by travellers.

Don C. Ohadike, a historian and one of the leading scholars on Igbo history wrote about the 1918 pandemic in the Social Science and Medicine Journal in 1991.

In the article titled, Diffusion and physiological responses to the influenza pandemic of 1918–19 in Nigeria, he wrote:

“The disease was introduced into Nigeria by passengers and crews who arrived via ship from overseas. Thus, coastal ports were the primary focus of the diffusion of the disease.

Its spread to the hinterland was facilitated by improvements in transportation technology. Neither maritime quarantine, nor the isolation of patients checked the spread of the disease.

‘The over-crowded urban centre were the hardest hit and, even though the pandemic declined almost as suddenly as it began, morbidity, mortality, and panic adversely affected the productive capacity of the country”.

Jan-Bart Gewald of the African Studies Centre Leiden, The Netherlands, who wrote about the Spanish flu in 2007, relied on Ohadike’s paper, about how the virus impacted Nigeria. But he went further to lament the dearth of global data on victims in many African countries, suggesting that the 500,000 quoted by Ohadike, even for Nigeria could have been a guesstimate.

In Gewald’s account, the virus travelled from England to Sierra Leone, then to Gold Coast, now Ghana before landing in Nigeria, the same way travellers move around today, going to high risk areas, only to bring the virus home with them.

Gewald gave a pan-African perspective about the Spanish virus, how it decimated African population in South Africa, Zambia, Namibia, Zimbabwe and reinforced the evil ideology of racial separation and supremacy. The virus affected the colonialists as well. But Africans living in cramped environment were bigger victims. South Africa lost 300,000 people, 6 per cent of its population to the virus.

In Ghana, then the Gold Coast, the virus affected more women than men and altered gender role in the northern part of the country. In the desolate village of Lorha, so many women were sick that, contrary to custom, men had to grind grain and prepare meals.

Ohadike similarly wrote about how the virus forced dietary change in southern Nigeria, making people to adopt cassava as a staple food.

“The attractiveness of Cassava to so many people is the fact that it requires comparatively less agricultural labour to produce. In periods of stress, where labour may be short, it becomes the crop of choice.”

Gewald catalogued how the Spanish virus caused economic crisis all over Africa, how it affected mining, migrant labourers who fled from endemic centres.

In Namibia, the pandemic was christened as Kaapitohanga, a disease that did not distinguish between white or black.

We quote Gewald again: As in the rest of the world Kaapitohanga, the disease which passes through like a bullet and gave its name to the year 1918, did not respect class, creed or status, and least of all race. It struck German settler, Afrikaner soldier, Herero townsman, and South African administrator with equal vehemence. In its path shops, businesses, administration and daily life ground to a standstill. Like the silver bullet and wooden stake of Stokerian fantasy the disease brought settlers, missionaries and administrators to their knees and obliterated any form of superhuman condition that might possibly have been attributed to the colonisers of Namibia. In the sights of Kaapitohanga all humans were fair game.

According to Gewald, the material available suggests that “Spanish Influenza” was introduced into Sierra Leone by the warship H.M.S. Mantua, which arrived in Freetown, capital and harbour of the British colony of Sierra Leone, on 15 August 1918, whilst escorting two passenger ships from Plymouth.

Captain of the Mantua, A. Dawson, later reported that on 31 July, “influenza was epidemic at Plymouth when Mantua and ships of her convoy left port”.

“In turn the Governor of Sierra Leone later reported to the Secretary of State that “the sanitary affairs of warships lie outside civil control and influenza is not a notifiable disease” consequently “no report was made”. On the day of its arrival, and contrary to the explicit warnings of “medical men” the Mantua was coaled by local labour. In “the week following the coaling … the number of labourers absent from work at the coaling station kept increasing” and by “the 27th August some five hundred out of six hundred were absent from work”.

In the disbelieving and shocked words of the Governor:

“The disease spread with devastating rapidity, disorganizing everything.
Everybody was attacked almost at once. Of my own household of twenty servants
not one escaped; and on one day I had to attend to their work myself. It can be
easily understood what such a state of affairs would mean to others less
fortunately situated“.

The disease spread so fast in Sierra Leone and by the time it was over, over a thousand people died.

Another ship S.S. Prah that had sailed from Freetown in August of 1918 took the disease to The Gambia. Before the ship reached Bathurst, now known as Banjul, Sierra Leone shipping authorities had warned via telegraph that the ship’s crew might bring influenza with them.

The account of Gambia’s response to the alert was so similar to the response of Nigeria’s health officials today to coronavirus.

“Upon arrival on 29th August, following telegraphic communication from Freetown warning of the outbreak of the pandemic in Sierra Leone, all passengers were “placed under surveillance, and instructed to report at the Colonial Hospital each morning for a period of four days after arrival”.

“On the day following the arrival of the S.S. Prah in Gambia one of the passengers developed symptoms of influenza and became severely sick, but not before passing the disease “on to every other inmate of the house, his medical attendant, etc”.

Containment failed. An estimated 387 people were killed by the virus out of a population of 8,000.

Following telegraphic communication from Sierra Leone stating that there was a serious epidemic of influenza at Freetown, “and advising that all ships from the United Kingdom and Sierra Leone should be considered infected”, influenza was declared a notifiable infectious disease on 3 September 1918.

“Shortly after, on 14th September the S.S. Ashanti arrived from Sierra Leone and the Gold Coast “with a history of much sickness on board”. The body of a man who had died on board before arrival was taken ashore; “a post-mortem examination showed that he died from influenza”.

“On the same day S.S. Bida put in from the Gold Coast with no less than 239 people on board. It was later reported that: These passengers landed at Lagos and dispersed in all directions before the sanitary authorities were aware of the fact. These passengers were undoubtedly the primary cause of spreading influenza so rapidly and so intensely throughout Nigeria, and of the many thousands of deaths which followed. It was quite
impossible to trace these passengers. In the days following, those who had been in contact with the passengers of the Bida, be they customs clerks or medical officers, spread the disease ever further, and on 25 September Lagos was declared infected under the Public Health Ordinance. Throughout the month of October the disease raged through Lagos

An estimated 1,200 people died from the influenza out of the Lagos population of 80,000 plus. Even much more deaths were recorded in the hinterland that led Ohadike to give an estimate of 500,000 dying in Nigeria of the pandemic disease.

It is certain the Nigerian authorities want to avoid a repeat of history, which led to the various containment strategies being deployed against coronavirus: tracing, tracking possible vectors and their contacts, curfews, shutdowns and statewide lockdowns. Not to forget, enlightenment campaigns stressing social distancing, hand washing and so on.