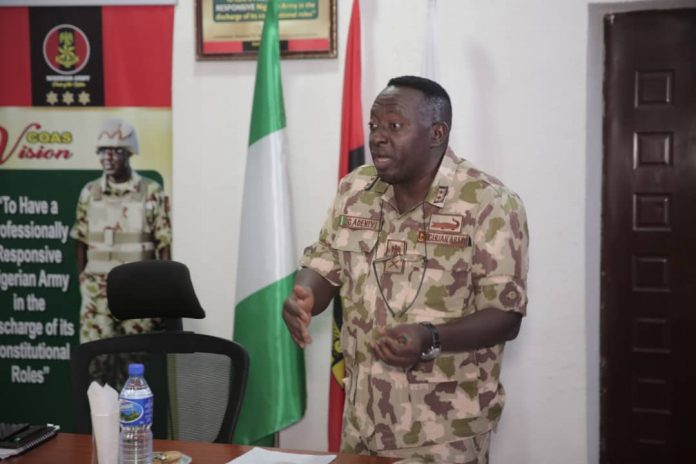 Barely seven months after Major General Olusegun Adeniyi was replaced as the threatre commander of Operation Lafiya Dole, Nigerian Army on Tuesday, a video of the replaced commander complaining of poor equipments has surfaced online.

Major General Adeniyi would now live a less combatant life as he is to resume at the Nigerian Army Resource Centre (NARC), Abuja eventhough he has commanded a couple of army’s brigades in the fight against Boko Haram.

General officer commanding (GOC) of the army’s 1 division in Kaduna, Faruk Yahaya has been named the new commander at the theatre of war.

Barely hours after his removal was announced, Adeniyi was seen in a video speaking to a superior believed to be Tukur Buratai who is the chief of army staff about how they had been badly hit by insurgents.

Inside the video, the General can be seen reassuring his superior that he and his soldiers remained battle ready as he lamented.

“Like I said earlier, we are with the leading embrance, 3 battalion are fighting and deployed, nobody is running.

“But what we have here, I will give you some estimates to guide your good decision, sir. Boko Haram has fired more than a hundred mortal bombs at us, they have fired more than 80 to 100 RPGs (rocket propelled grenades) at us in addition to more than 8 to 10 gun trucks from every side since yesterday.

“We have not run, and the soldiers are not misbehaving or disobeying orders. We have casualties, I will come and see you in person on what we need to do. But we are not running.”

Pointing at the one the vehicles being fixed by some soldiers, Adeniyi continued:“That’s one of our MRAP’s (mine-resistant ambush protected) tyres that ran flat after bullet touched it. We have used more than 20 MRAP tyres here. That’s another one, sir. We have changed close to 250 Hilux tyres due to the terrain. This is what we are facing.”

He added that they were ready to achieve the mission of the superior.

According to report, the time in which the video was recorded is not yet clear but some sources claimed that it was at the time in January when Adeniyi’s convoy was attacked and his driver killed in Jakana, Borno state, where the insurgents struck repeatedly.

TheCable reported that some military sources who spoke under anonymity disclosed that Adeniyi may have been set up as “he is one general who doesn’t listen to his fellow generals.”

“Yes, he is good and always leading from the front, but he has a lot of issues with other generals and we suspect they teamed up to set him up, if not he should still be the commander,” one of the sources said.

The army, however, had said Adeniyi’s redeployment and that of others is a routine exercise intended to reinvigorate the system for greater professional effectiveness and efficiency.