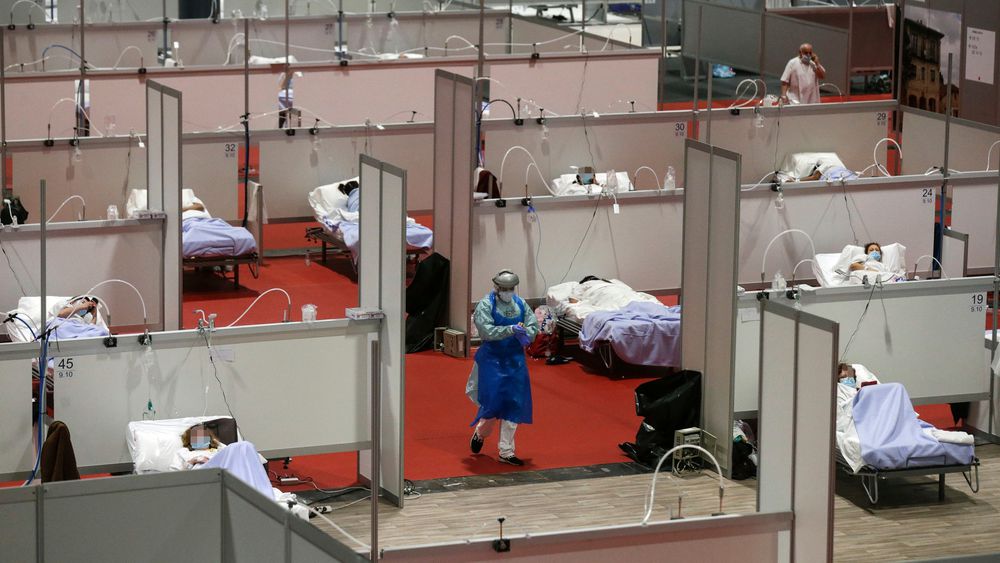 Spain’s death toll due to the coronavirus has now topped 9,000, the country’s health authorities said on Wednesday.

Another 864 people died in the latest 24 hour period, another record for Europe’s worst affected nation after Italy.

The head of the United Nations warned on Wednesday that the global coronavirus is the worst crisis the world has faced since World War II,

Antonio Guterres spoke as the UN launched a report on the social and economic damage caused by the COVID-19 pandemic.

“The new coronavirus disease is attacking societies at their core, claiming lives and people’s livelihoods,” the UN Secretary General said. “COVID-19 is the greatest test that we have faced together since the formation of the United Nations.”

“We are facing a global health crisis unlike any in the 75-year history of the United Nations — one that is killing people, spreading human suffering, and upending people’s lives,” the report said.

Meanwhile U.S. President Donald Trump has warned Americans to brace for a “hell of a bad two weeks” ahead as the White House projected there could be between 100,000 and 240,000 deaths in the U.S. from the pandemic. However, it said such figures were not inevitable.

Trump said following official guidelines was a “matter of life and death” for Americans and predicted the country would soon see a “light at the end of the tunnel”.

The latest from Europe

In Europe, authorities have confirmed the deaths of two children from coronavirus, while France and Spain reported disappointing figures as the number of fatalities and infections continued to rise.

Spain announced a new record on Wednesday, reporting the highest number of deaths in 24 hours for the second consecutive day — a total of 864, up from 849 on Tuesday.

Belgium reported the death of a 12-year-old girl from the virus, while the UK said a 13-year-old boy from London had also died.

The Netherlands has extended its lockdown period until April 28. The country has now reported over 1,000 deaths.

Poland is bringing in new measures restricting movement, including closing non-essential businesses. Children under-18 can only go outside accompanied by an adult.

France’s daily COVID-19 death toll doubled in a week, Tuesday’s figures revealed. 359,000 fines have been imposed and 5.8 million security checks carried out during the first fortnight of the lockdown, the French interior minister says.

Italy’s daily death toll also topped 800 again but authorities are cautiously talking of reaching a plateau in the number of cases.

The UK’s daily number of deaths rose by 389 to make a total of 1,789. Amid criticism over a lack of testing facilities, a government minister says the aim is to increase tests to 25,000 a day by mid-April.

Turkey is sending a plane load of medical supplies to Italy and Spain, Turkish media report.
For a more detailed report of Tuesday’s developments around Europe, click here.

‘Help the poorest and most vulnerable’

Commenting on the UN report, Antonio Guterres called for “coordinated, decisive, inclusive and innovative” action from the world’s richer nations to help “the poorest and most vulnerable people and countries”.

Otherwise the world would “face the nightmare of the disease spreading like wildfire in the global South with millions of deaths and the prospect of the disease re-emerging where it was previously suppressed”, he said.

António Guterres@antonioguterres
We must respond decisively – with shared responsibility & global solidarity – to stop the spread of #COVID19 and the devastation it is causing everywhere.

The US president’s comments came after he announced on Sunday an extension to April 30 of the social distancing guidelines. Americans are advised to stop large gatherings and work from home.

It was an abrupt reversal for Donald Trump, who said earlier he wanted the country back to normal by Easter on April 12, and wanted to see Americans “pack the pews” for Easter Sunday church services.

He also rejected those who compared the new coronavirus to the flu — despite having repeatedly done so himself.

The president played down concerns from New York’s Andrew Cuomo and other governors that state hospitals don’t have enough ventilators. Trump said the federal government had a stockpile of 10,000 ventilators and planned to distribute them as needed.