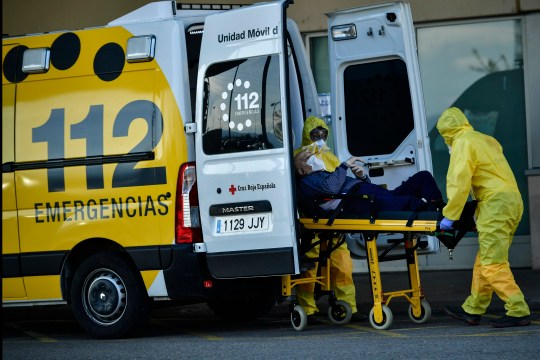 A further 838 people have died from coronavirus in Spain, bringing the country’s death toll to 6,528.

The number of Covid-19 cases in the nation also rose by 6,549, bringing the total of infected people to 78,797. Spain has been among the countries worst hit by coronavirus, with the nation’s death toll overtaking China’s this week.

Authorities in Spain have since voted to extend emergency measures confining people in their homes except for essential trips for food, medicine and work.

A temporary morgue was also set up at an ice rink in Madrid, where health workers warn services are ‘collapsing’ due to the influx of patients lining hospital corridors.

Shocking footage from inside the Infanta Leonor Hospital and the Severo Ochoa de Leganes Hospital showed patients lying on the floor while hooked up to oxygen tanks as they waited to be seen by medical staff.

Javier Garcia, a representative for the General Union of Workers, had told how Severo Ochoa de Leganes Hospital’s emergency ward was at ‘three times’ its capacity, meaning many patients were left ‘without a bed, sitting on plastic chairs for more than 30 hours’.

He continued: ‘This morning I saw a person on the floor between two seats. Emotionally, this is terrible.’ The max capacity for Severo Ochoa de Leganes Hospital’s emergency ward is believed to be 80, but last week there were 240 patients in the facility.

Spanish Prime Minister Pedro Sánchez has now ordered all citizens with non-essential jobs to stay at home. He previously declared a state of emergency for the country at the start of March.

On Saturday evening, he noted that ‘extraordinarily tough’ measures are now needed to ensure the coronavirus pandemic does not get worse.

Announcing the closure of non-essential workplaces, he said: ‘This measure will reduce people’s movement even further [but] it will reduce the risk of contagion and allow us to unblock out intensive care units.’

The new measure will come into force on Monday, March 30, and last until April 9, Sánchez said. He added: ‘It’s Europe’s time to act. Europe is at risk.’ It is one of the worst hit countries in the coronavirus crisis (Picture: EPA) A morgue has been set up on an ice rink in Madrid (Picture: Getty Images)