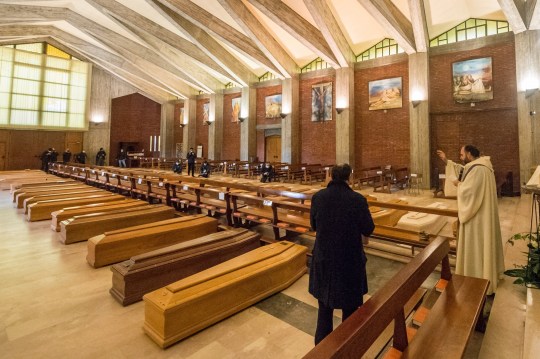 A priest has been pictured blessing 90 coffins amid the coronavirus crisis that has killed more than 10,000 people in Italy.

Images of Don Marcello Crotti, parish priest of the church of San Giuseppe, in Seriate, showed him walking beside the coffins before they are sent away to be cremated. Funerals are currently banned in Italy due to the ongoing coronavirus pandemic.

Priest Father Mario Carminati, a senior priest in Seriate, told Reuters that the vast numbers of people dying had led Italian authorities to not know ‘where to put the coffins’.

He described how clusters of coffins have arrived daily at St Joseph’s Church. When enough arrive, he and other priests carry out mass blessings before a forklift loads them onto army trucks, which then take them to be buried or cremated.

Father Carminati said the saddest thing for him was knowing that many of his parishioners had died alone, away from their loved ones, due to the restrictions in place at hospitals across Italy.

Families are banned from having contact with their relatives in hospital, in a bid to prevent the spread of coronavirus. Father Carminati said: ‘We often talk about the most needy and these are truly the most needy now.

‘They are the most needy even though they are no longer alive. No one has the time or opportunity to take care of them anymore so I decided to open the house of the Lord to them.’

Seriate is in the Province of Bergamo, in the Lombardy region of Italy – one of the country’s worst hit areas by coronavirus. Of the new deaths recorded on Saturday, 542 were in the region.

There have been 5,944 deaths in Lombardy in total. The national government is now said to be mulling over plans to extend a country-wide lockdown to mid-April.

At present, all non-essential activities are banned in Italy until April 3. Italy has the largest death toll from Covid-19, and the second highest number of cases, behind the United States. It surpassed China’s total cases on Friday.