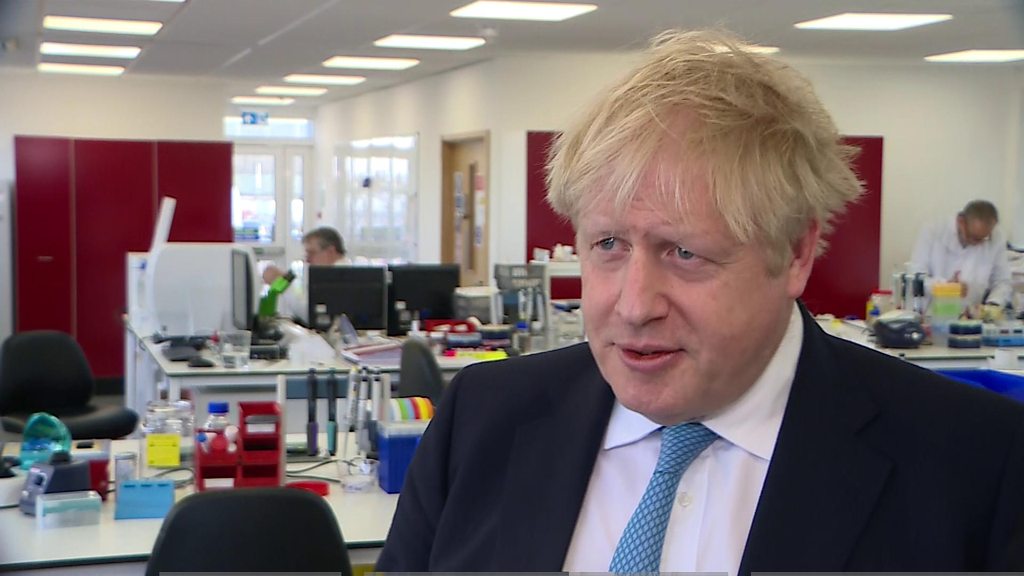 British Prime Minister Boris Johnson warned on Sunday that “things will get worse before they get better” and that further restrictions may be imposed on citizens.

The British leader, who has been in self-isolation since Friday when he revealed that he had tested positive for the disease, stressed in a letter to be sent to every household in the country that confinement rules “must be observed” and that “police will issue fines” if they are broken.

His warning came just hours after the country announced that its death toll from the deadly virus had passed the grim 1,000 threshold while the number of confirmed cases stood at 17,089.

The number of fatalities around the world soared past 30,000 on Saturday, 10,023 of which were reported in Italy alone.

The southern European country remains the hardest-hit country in the world, with 889 new deaths on Saturday. A total of 92,472 confirmed cases of the novel coronavirus have now been reported in the country.

The spread of the pandemic has slowed down in the last few days, from a 8,3% increase on Thursday to 7,4% on Friday and 6,9% on Saturday.

With 319 new deaths due to COVID-19 on Saturday, France’s death toll crossed the 2,000 bar. Authorities also revealed that there are currently more than 4,200 people in intensive care in the country.

Prime Minister Edouard Philippe warned that “the first 15 days of April will be difficult, even more difficult than the 15 past ones”, as France prepares for a sharp increase in the number of COVID-19 cases according to projections.

“The fight has only begun”, Philippe said. The French health minister Olivier Véran added that the country wants to increase its intensive care bed capacity from 5,000 currently to 14,000.

Spanish authorities announced on Saturday that a record 832 people had succumbed from COVID-19 since yesterday, bringing the country’s total death toll to 5,690.

Prime Minister Pedro Sanchez decreed that all “non essential” economic activity is to stop for the next two weeks to slow the spread of the disease.

Across Europe, countries have reinforced measures to contain the spread of the deadly disease with Hungary and Ireland both introducing 15-day lockdown on Friday.

France and Belgium, already nearly two weeks into their own lockdowns, both extended their self-isolation policies by another two weeks on Friday, a day after Spain had announced its own extension.

Russia announced on Saturday it would completely close its borders due to the global COVID-19 pandemic.

In the UK, NHS England announced on Saturday that two new hospitals would be created in the coming days.

These two facilities in Birmingham and Manchester — both to be housed in conference centres —will each provide an initial 500 beds that could then be expanded by up to 2,000 beds.

US leads world in COVID-19 cases

Meanwhile, the US became the first country in the world to report more than 100,000 confirmed cases on Friday. It now counts over 124,600 cases.

The number of fatalities has also shot up, standing at 2,185 on Saturday with New York remaining the most heavily-impacted city, accounting for 672 of the deaths.

New Yorkers and residents of neighbouring states including New Jersey and Connecticut are now being urged by the Centre for Disease Control “to refrain from non-essential domestic travel for 14 days”.

A World Health Organization spokesperson said earlier this week that the United States had the “potential” to become the new epicentre of the pandemic, due to a “very large acceleration” in infections.

The global total of confirmed cases was pushed over 660,000 on Saturday.

Nations around the world are taking measures to mitigate the impact the pandemic will have on the economy. The Moody’s credit rating agency forecast that all G20 countries would fall into recession this year.

In France, the government issued measures to temporarily adapt the French labour law to create a “real war economy”, the Prime Minister said with businesses allowed to make employees work longer hours, or work nights or Sundays as needed.

Germany took a similar approach, promising that it would guarantee at least €550 billion in loans to businesses impacted by the pandemic and taking measures to alleviate the fiscal burden on companies.

At the European level, the European Central Bank has pledged to pour in €750 billion into the euro area economy while the European Commission has relaxed budgetary rules to give member states more leeway to allocate funds to the public health crisis.

It also announced on Saturday that it will issue a new budget proposal for the 2021-2027 period to include a “stimulus package that will guarantee the Union’s cohesion through solidarity and responsibility,” Commission President Ursula von der Leyen said.

Member states, however, have so far failed to find a common strategy, with hard-hit southern nations including Italy and Spain, calling for the creation of so-called “corona bonds” which would pool debt. They are opposed by richer northern member states including Germany and the Netherlands which favour using the European Stability Mechanism created following the 2008 financial crisis.

More than 3.2 million Americans filed for unemployment benefits last week, according to the country’s labour department. That is more than four times the previous record which was 695,000 Americans in October of 1982, the department said.

The US has responded to the growing number of coronavirus cases there with the largest economic rescue in history, worth €1.85 trillion, to help businesses, workers and the health care system.

The Senate Majority Leader Mitch McConnell said it was “a wartime level of investment into our nation”.

The rescue package is larger than the 2008 bank bailout and 2009 recovery act.

The legislation surprisingly put Democrats and Republicans on the same side of the political field, with both Obama’s Secretary of State John Kerry and President Donald Trump taking to Twitter to denounce a congressman who said he would not vote for the bill.

The UN has launched a $2 billion (€1.85 billion) plan to develop a humanitarian response to COVID-19 in the poorest countries.

A vaccine is still months away, says WHO

WHO chief Dr. Tedros Adhanom Ghebreyesus said on Friday that the world must “stay calm” and that “we must fight, unite, ignite”.

“Unite because we are one humanity, we can only fight together. And ignite the industrial mind and innovation of G20 countries to produce and distribute the tools needed to save lives.”

The disease has so far predominantly impacted older adults and people of any age who have a serious underlying medical condition such as chronic lung disease, a serious heart condition, obesity or patients fighting cancer.

But the young are not immune. A healthy 16-year-old girl died of coronavirus in France on Thursday.

In Italy, authorities are investigating if a hotly contested Champions League match in Milan in February poured rocket fuel on the crisis that is overwhelming Italian hospitals. Italian doctors are being forced to choose who will receive desperately needed ventilators and who won’t.

Finland, which has 1,025 confirmed cases of coronavirus and has reported seven deaths, announced on Wednesday the lockdown of the capital Helsinki and its region, starting Friday until 19 April.

Russia announced on Saturday that it would temporarily close all its borders starting on March 30. International flights had already been grounded from Friday except those bringing Russian nationals home from abroad.

Russia also delayed a vote on constitutional changes amidst the coronavirus outbreak. The vote included a change to allow President Vladimir Putin to seek another presidential term.

The country has more than 1,260 confirmed cases, according to the John Hopkins University’s tally, and has so far recorded four deaths.

Virus cases in South Africa rose to 709 as the country got ready to go on lockdown on Friday. New Zealand declared an emergency ahead of an unprecedented lockdown which begins on Wednesday. The island nation’s recorded its first death on Sunday.

There were 981 cases of the virus in the country on Sunday, according to a tally maintained by researchers at Johns Hopkins University.