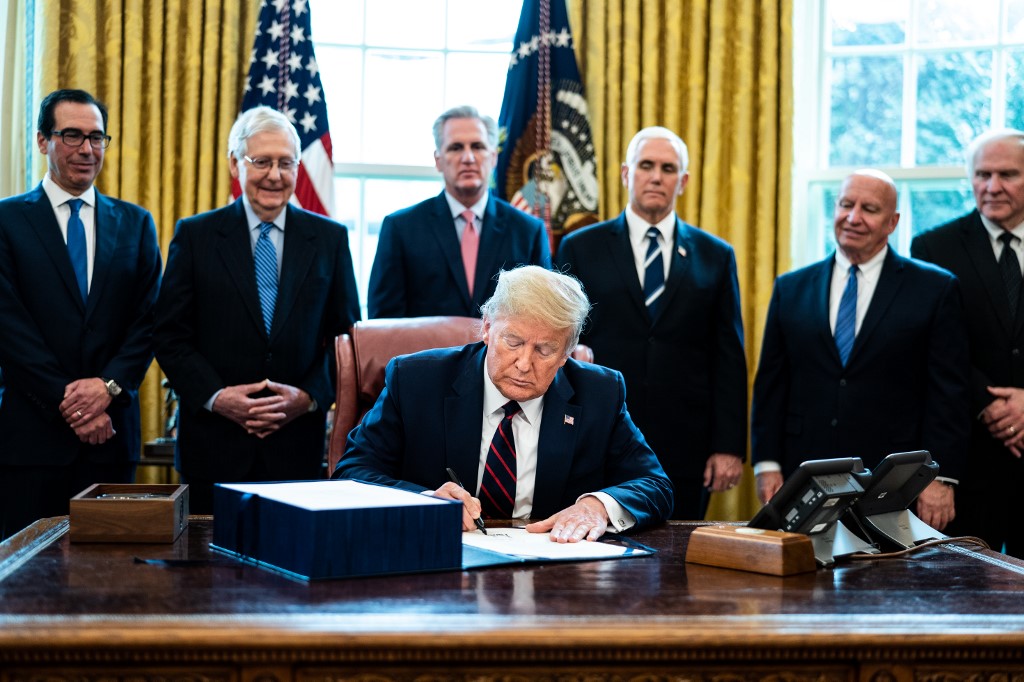 President Donald Trump signed into law Friday the $2 trillion rescue plan to salvage a US economy crippled by the novel coronavirus, on a day the nation’s total count of COVID-19 cases surpassed 100,000.

Trump’s signature brings an end to a dramatic, weeklong legislative saga on Capitol Hill and triggers the distribution of millions of relief checks of up to $3,400 for an average American family of four.

Hours earlier lawmakers in the House of Representatives united to green-light the mega-plan as the number of recorded deaths from the virus hit 1,693.

“I want to thank Democrats and Republicans for coming together and putting America first,” Trump said. “This will deliver urgently needed relief to our nation’s families, workers and businesses.

That’s what this is all about.” Trump signed a separate order late Friday allowing the Pentagon to bring former troops and members of the National Guard back to active duty to help the military combat the virus, the Washington Post said, citing a Pentagon spokesman.

The president also took the long-called-for step of invoking the Defense Production Act to compel auto giant General Motors to quickly honor its commitment to making ventilators, machines crucial to keeping critically ill coronavirus patients alive but which are in short supply in hospitals.

“GM was wasting time,” the president said. Nationwide the number of coronavirus cases surpassed 104,000. The need for medical supplies is acute in New York state, the US hotbed of the epidemic where 44,635 infections have been confirmed.

The death toll there increased Friday to 519 — up from 385 the previous day — but Governor Andrew Cuomo expressed optimism that the increase in the hospitalization rate has slowed.

Cuomo announced the creation of temporary hospitals at large facilities in each borough of New York City — including at a horse racing track in Queens — modelled on an already-constructed space in Manhattan’s Javits Center.

The national rescue bill pumps $100 billion into hospitals and health facilities in critical need of medical gear like personal protective equipment and intensive care beds, creates a $500 billion loan reserve for large corporations including airlines, and provides $377 billion in grants to small businesses.

It also dramatically expands unemployment assistance, aid that will cushion the blow for a staggering 3.3 million people who filed jobless claims in the week ending March 21.

“Our nation faces an economic and health emergency of historic proportions due to the coronavirus pandemic, the worst pandemic in over 100 years,” House Speaker Nancy Pelosi told colleagues shortly before the chamber passed the measure.

Several lawmakers including top House Republican Kevin McCarthy hailed the bill as a critical lifeline for workers and small businesses.

Treasury Secretary Steven Mnuchin pledged a speedy distribution of checks. “Americans need that money now, they can’t wait for government to take three or four or six months like we normally do,” Mnuchin said on Fox Business Network, adding he expected direct deposits of the cash to arrive in three weeks.

The Senate had passed the huge bill earlier this week. The vote in the House was notable for the implementation of social distancing rules that prevented lawmakers from all gathering on the floor, leading to unprecedented scenes of members sitting in the upper galleries to allow for sufficient spacing.

With the House in recess this week, leaders had wanted a quick voice vote requiring just a few members present. But Republican Thomas Massie, who opposed the bill, threatened to stall the measure.

Ultimately the House defeated Massie’s maneuver and passed the legislation but not before Trump savaged his fellow Republican on Twitter as a “third rate Grandstander.” Pelosi said the $2 trillion rescue plan — the third and by far largest coronavirus legislative measure — will not be the end of government assistance to battered communities.

“We must advance a fourth bill to address continued needs,” she said, noting that state and local governments would need “vastly more” funding to address the crisis.