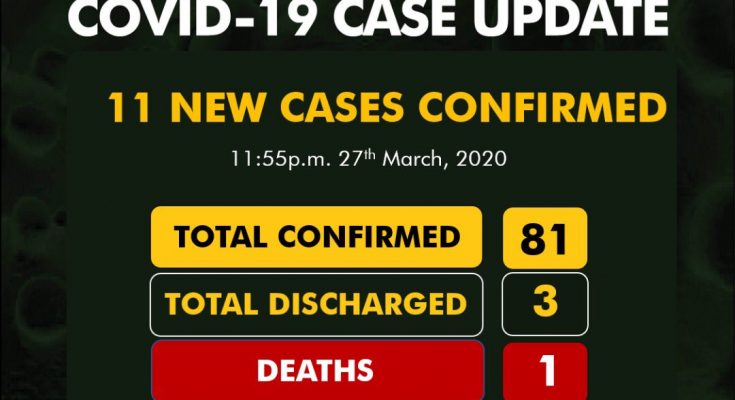 The number of confirmed cases of coronavirus in Nigeria has risen to 81, the Nigeria Centre for Disease Control said on Friday night.

Of the 81 confirmed cases, Lagos has 52, the federal capital territory (FCT) 14, Ogun three and Oyo three.

Edo, Bauchi and Enugu states have two cases each. And Ekiti, Osun and Rivers states have one case each.

Suleiman Achimugu, former managing director of the Petroleum Products Marketing Company (PPMC), is Nigeria’s only casualty from the disease so far. He died on Monday after returning to the country from the UK.

Three patients have been discharged from hospital.

The Lagos state government had said six patients have recovered from the disease and would soon be allowed to go home.

Nigeria has closed its land borders and international airports in the last week to curb the spread of the virus. The government also said it might ban inter-state travels soon.

But the country’s Information Minister Lai Mohammed said the country might take more strict measure citing an “exponential spread” threat of the virus “in days to come.”