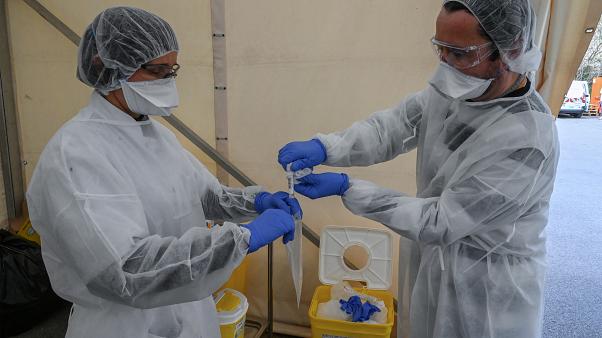 Ireland announced on Friday that it will introduce a total lockdown from midnight and until 12 April.

“Everyone must stay home in all circumstances”, the Irish Taoiseach Leo Varadkar said, adding that people would be allowed to go to work, go shopping or exercise.

Italy reported a new grim record in the COVID-19 pandemic on Friday, with over 900 deaths in one day, surpassing Spain, which recorded 769 deaths.

919 people died in 24 hours in Italy on Friday, to which were added the 50 deaths from the Piedmont region that Italy said it forgot to report in its official death toll on Thursday.

The Italian death toll has reached 9,134 and the country recorded a total of 86,498 confirmed cases.

The US is now the country with the most confirmed cases in the world: over 100,000 cases, according to a count kept by the John Hopkins University – 18,000 of which were reported in one day on Friday.

In terms of fatalities, the US still remains far behind China (3,169) — where the virus originated — as well as Spain and Italy.

The UK announced 181 new deaths on Friday, taking its total to 759. The UK has 14,543 confirmed cases of coronavirus.

The global total of confirmed cases was pushed over half a million on Thursday.

France on Friday announced that its lockdown will be extended until 15 April.

Belgium followed suit, extending its own lockdown for two weeks, from 5 to 19 April.

Spain has extended its state of emergency for two more weeks to allow the government to extend stringent lockdown measures in a desperate attempt to contain the coronavirus.

A vaccine is still months away, says WHO

“We must fight, unite, ignite”, Dr. Ghebreyesus said. “Fight with every resource at our disposal. Unite because we are one humanity, we can only fight together. And ignite the industrial mind and innovation of G20 countries to produce and distribute the tools needed to save lives.”

Earlier in the week, the UK confirmed the death of the deputy to the British ambassador to Hungary, Steven Dick, 37, of COVID-19.

A healthy 16-year-old girl died of coronavirus in France on Thursday.

The Moody’s credit rating agency said it is forecasting an economic recession for all G20 countries in 2020, while United Nations director-general Antonio Guterres said coronavirus “threatens the whole of humanity.”

The French government has also published measures to temporarily adapt the French labour law to create a “real war economy”, Philippe said: businesses will be temporarily allowed to make employees work longer hours, or work nights or Sundays as needed.

“We will face a long effort, together,” the French PM Edouard Philippe told the parliament.

“The health crisis is here, but it will also become an economic and social crisis. We are only at the beginning.”

Meanwhile over 225,000 people have been fined in France for violating lockdown rules, the French Interior minister said on Thursday.

More than 3.2 million Americans filed for unemployment benefits last week, according to the country’s labour department. That is more than four times the previous record which was 695,000 Americans in October of 1982, the department said.

The US now has the third most cases in the world with nearly 70,000 confirmed cases of coronavirus. The country of 327 million recorded more than 1,000 deaths according to two separate counts of the toll.

A World Health Organization spokesperson said on Tuesday that the United States had the “potential” to become the new epicentre of the pandemic, due to a “very large acceleration” in infections.

Russia also delayed a vote on constitutional changes amidst the coronavirus outbreak.

President Vladimir Putin addressed the nation on Wednesday and encouraged Russians to stay at home, saying that only essential businesses such as pharmacies, stores and banks would remain open.

The authorities reported 163 new cases of the virus in Russia bringing the total to over 600 nationwide.

The constitutional vote that he delayed included a change to allow Putin to seek another presidential term.

Earlier this week, the country overtook the death toll in China which stands at 3,285. Italy, the world’s worst affected country, has an official death toll of 6,820.

Finland, which has 880 confirmed cases of coronavirus and has reported three deaths, announced on Wednesday the lockdown of the capital Helsinki and its region, starting Friday until 19 April.

The UN is launching a $2 billion (€1.85 billion) plan to develop a humanitarian response to COVID-19 in the poorest countries.

Governments step in to rescue economies

The US has responded to the growing number of coronavirus cases there with the largest economic rescue in history. Politicians agreed a €1.85 trillion pandemic response package to help businesses, workers and the health care system. The move comes as the economy in the US moves towards a recession.

The Senate Majority Leader Mitch McConnell said it was “a wartime level of investment into our nation”. The bill still needs to be signed off by President Donald Trump. The rescue package is larger than the 2008 bank bailout and 2009 recovery act.

The legislation surprisingly put Democrats and Republicans on the same side of the political field, with both Obama’s Secretary of State John Kerry and President Donald Trump taking to twitter to denounce a congressman who said he would not vote for the bill.

John Kerry@JohnKerry
Breaking news: Congressman Massie has tested positive for being an asshole. He must be quarantined to prevent the spread of his massive stupidity. He’s given new meaning to the term #Masshole. (Finally, something the president and I can agree on!) https://twitter.com/realDonaldTrump/status/1243534441772974081 …

Donald J. Trump@realDonaldTrump
Looks like a third rate Grandstander named @RepThomasMassie, a Congressman from, unfortunately, a truly GREAT State, Kentucky, wants to vote against the new Save Our Workers Bill in Congress. He just wants the publicity. He can’t stop it, only delay, which is both dangerous……

Virus cases in South Africa rose to 709 as the country got ready to go on lockdown on Friday. New Zealand declared an emergency ahead of an unprecedented lockdown which begins on Wednesday.

There are just over 500 cases of the virus in the country, according to a tally maintained by researchers at Johns Hopkins University.