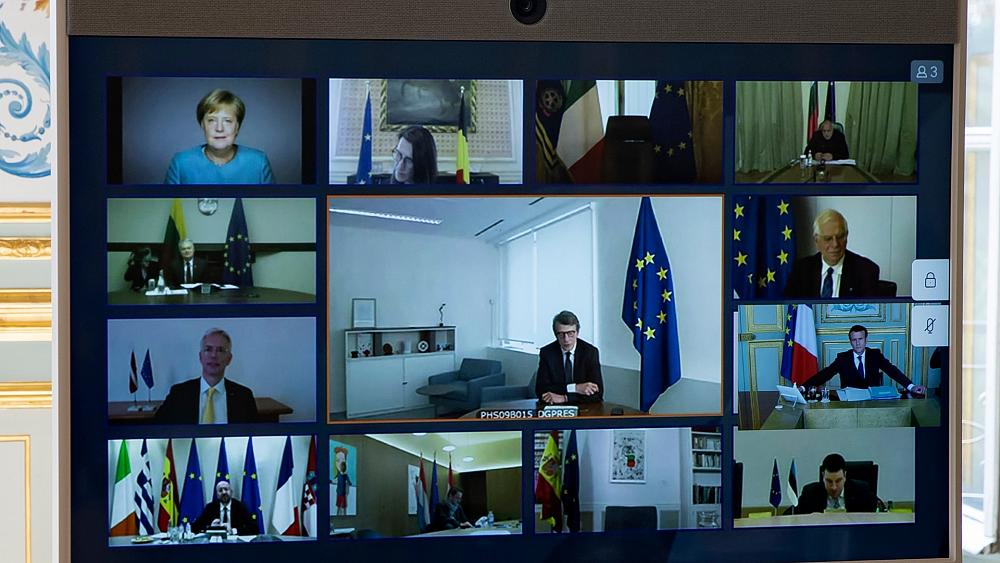 EU leaders failed to agree on a common economic response to the COVID-19 pandemic on Thursday, giving themselves another two weeks to come up with new financial instruments after Spain and Italy called for greater solidarity.

The summit which took place over video-conference to respect social distancing rules ended three hours later than initially scheduled with leaders inviting “the Eurogroup to present proposals to us within two weeks”.

“These proposals should take into account the unprecedented nature of the COVID-19 shock affecting all our countries and our response will be stepped up, as necessary, with further action in an inclusive way, in light of developments, in order to deliver a comprehensive response,” leaders said in a joint statement.

Coronavirus latest: Cases in United States surpass China and Italy
Rome and Madrid are believed to have opposed a draft joint statement with Giuseppe Conte, Italy’s Prime Minister, demanding the EU deploys “innovative financial instruments truly adapted to a war”, according to an official.

Meanwhile, Spanish leader Pedro Sanchez took to Twitter after the summit to say Madrid, “with the support of Italy and other countries, demands a clear and forceful response from the EU”.

Italy and Spain have the highest number of deaths from COVID-19 in the world, with more than 8,200 and 4,360 fatalities respectively.

They are said to be backing so-called “corona bonds” that would pool EU member states’ debt.

The idea is not new and first surfaced following the 2008 global financial crisis which severely impacted southern member states including Italy, Spain, Portugal and Greece.

But more fiscally-balanced northern member states such as the Netherlands, Germany, Austria and Finland were opposed to the idea then, and continue to be so.

Austrian Chancellor Sebastian Kurz, for instance, said after the summit that the bloc should adopt “strict measures and cooperate closely” to contain the spread of the virus, adding that the “right instrument” to do so is the European Stability Mechanism (ESM).

The EU agency was set up in 2012 as a euro-area bailout fund and has a lending capacity of €700 billion.

Sebastian Kurz@sebastiankurz
Just finished videoconference of the #EuropeanCouncil today. It is crucial that we show determination by adopting strict measures and cooperate closely within the #EU to contain the spread of #COVID-19.

Sebastian Kurz@sebastiankurz
We must also do our utmost to help our economies and stabilise markets. The ESM is the right instrument for this in addition to the ongoing measures by the #ECB. The #WesternBalkans should be included in our joint efforts to procure medical equipment.

Individual member states have so far unveiled emergency financial packages to minimise the economic impact of the pandemic within their borders while the European Central Bank has pledged to pour €750 billion into the bloc’s economy.

The EU has also relaxed rules on how much member states can borrow and hand out as state aid. Brussels has also announced the creation of a stockpile of medical equipment, such as ventilators, masks and lab supplies.