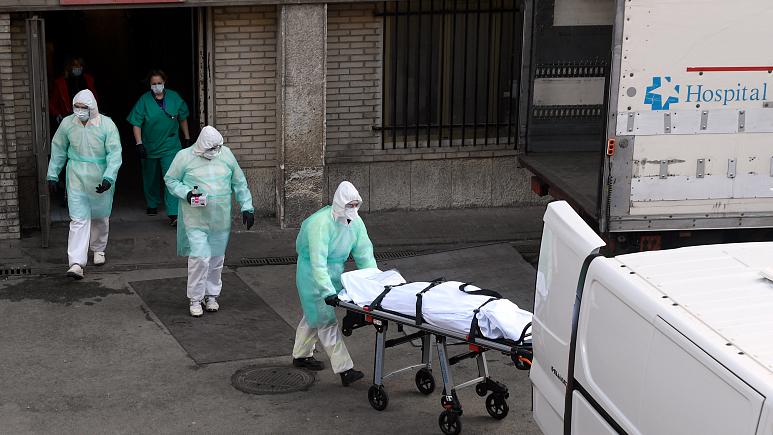 Spain extended its state of emergency for two more weeks to allow the government to extend stringent lockdown measures in a desperate attempt to contain the coronavirus.

Spain reported 738 new deaths in one day on Wednesday while Italy announced 683. The two countries have the highest fatality rate in the global pandemic.

Spain has now surpassed China, where the pandemic began, in the overall number of COVID-19 deaths.

The Moody’s credit rating agency said it is forecasting an economic recession for all G20 countries in 2020, while United Nations director-general Antonio Guterres said coronavirus “threatens the whole of humanity.”

India on Tuesday started implementing the world’s biggest lockdown of 1.3 billion people, following the example of a number of countries, especially in Europe, which remains the global coronavirus hotspot.

Finland, which has 880 confirmed cases of coronavirus and has reported three deaths, announced on Wednesday the lockdown of the capital Helsinki and its region, starting Friday until 19 April.

The country has introduced legislation to implement a “war economy” amid the pandemic and as the country has been under lockdown for a week.

The UK on Wednesday confirmed the death of the deputy to the British ambassador to Hungary, Steven Dick, 37, of COVID-19.

British PM Boris Johnson announced on Wednesday that over 400,000 people answered a call to volunteer for the NHS health service in one day.

US now has third most cases in the world after Italy as deaths top 1,000.

The UK’s Prince Charles, the heir to the British throne, has tested positive for coronavirus

The French government has also published measures to temporarily adapt the French labour law to create a “real war economy”, Philippe said: businesses will be temporarily allowed to make employees work longer hours, or work nights or Sundays as needed.

“We will face a long effort, together,” the French PM Edouard Philippe told the parliament.

“The health crisis is here, but it will also become an economic and social crisis. We are only at the beginning.”

US has third most cases in world, death toll tops 1,000

The US now has the third most cases in the world with nearly 70,000 confirmed cases of coronavirus.

The country of 327 million recorded more than 1,000 deaths according to two separate counts of the toll.

A World Health Organization spokesperson said on Tuesday that the United States had the “potential” to become the new epicentre of the pandemic, due to a “very large acceleration” in infections.

Russia also delayed a vote on constitutional changes amidst the coronavirus outbreak.

President Vladimir Putin addressed the nation on Wednesday and encouraged Russians to stay at home, saying that only essential businesses such as pharmacies, stores and banks would remain open.

The authorities reported 163 new cases of the virus in Russia bringing the total to over 600 nationwide.

The constitutional vote that he delayed included a change to allow Putin to seek another presidential term.

On Wednesday morning Spain had registered 3,434 dead, taking over the death toll in China which stands at 3,285. Italy, the world’s worst affected country, has an official death toll of 6,820.

The UN is launching a $2 billion (€1.85 billion) plan to develop a humanitarian response to COVID-19 in the poorest countries.

Governments step in to rescue economies

The US has responded to the growing number of coronavirus cases there with the largest economic rescue in history. Politicians agreed a €1.85 trillion pandemic response package to help businesses, workers and the health care system. The move comes as the economy in the US moves towards a recession.

The Senate Majority Leader Mitch McConnell said it was “a wartime level of investment into our nation”. The bill still needs to be signed off by President Donald Trump. The rescue package is larger than the 2008 bank bailout and 2009 recovery act.

Virus cases in South Africa rose to 709 as the country got ready to go on lockdown on Friday. New Zealand declared an emergency ahead of an unprecedented lockdown which begins on Wednesday.

There are just over 500 cases of the virus in the country, according to a tally maintained by researchers at Johns Hopkins University.