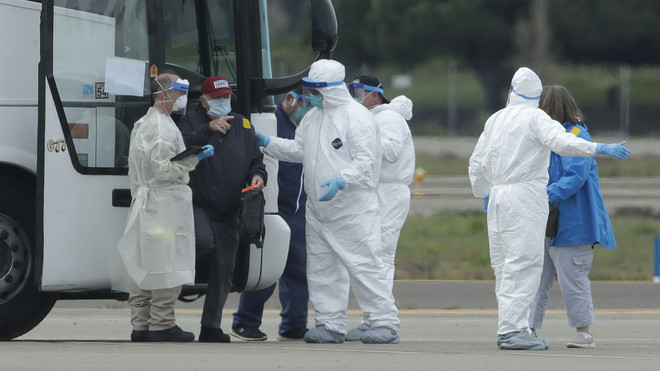 The United States has reached a grim milestone as the number of deaths linked to coronavirus passed 1,000 in the country on Thursday, according to a count by NBC News.

Deaths continued to rise in New York, which has been called the epicenter of the epidemic on the U.S. There have been at least 334 deaths linked to the illness caused by the novel coronavirus as of early Thursday.

“We still have the trajectory going up. We have not turned the trajectory, nor have we hit the apex,” New York Gov. Andrew Cuomo said at a news briefing Wednesday.

The governor added that there seemed to be some early evidence that New York’s “density control plan” could be helping to slow hospitalization rate projections but he appeared to treat the signs with caution at this stage.

As of Wednesday evening, there had been more than 32,700 cases in the state, and more than 20,000 of those have been reported in New York City, according to the city’s health department. There have been 132 deaths in Washington state, health authorities say.

The Senate Wednesday night approved a historic $2 trillion coronavirus spending bill that includes direct payments to Americans, boosted unemployment insurance and other measures to help those who have lost jobs and to try and ease the economic fallout of the crisis. The House is expected to vote on Friday.

State and local governments around the country have issued stay-at-home orders or requests, in some cases ordering non-essential businesses to close, as a way to slow the spread of the virus and prevent health systems from being overwhelmed.

Major sports have been canceled or put on hiatus, gambling was ordered shut down in Las Vegas and the rest of Nevada, and in places with stay-at-home orders bars and restaurants were ordered closed or restricted to take out and delivery.

In Los Angeles, which along with California has ordered non-essential businesses to close in order to slow the spread of the virus, the mayor warned “we have not seen the darkest days.”

“Folks who think that we’re going to be done in a couple of weeks, it’s simply not that case anywhere,” Mayor Eric Garcetti said at a news conference Wednesday.

Around the world, countries are enforcing stricter lockdown measures to prevent people from gathering or travelling. India, a country of 1.3 billion, entered its second day on lockdown Thursday.

In Italy, the death toll reached 7,503 Thursday, according to the Johns Hopkins University tracker.

And Spain saw its death toll surpass China’s — the epicenter of the virus — with at least 3,647 people killed.