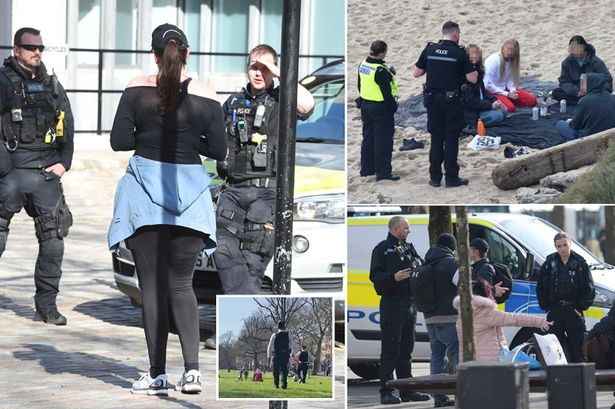 Cops were seen patrolling the streets up and down the country as they began to impose Boris Johnson’s string of drastic measures introduced in a desperate attempt to stop the spread of the deadly bug.

Cops were spotted standing by a mobile phone kiosk in Hackney, North East London, as employees packed away tables and chairs about 11.20am today.

And in another incident in the capital, mounted officers were seen asking a customer to wait outside a bakery while another was being served to comply with the social distancing policies.

The cop could be seen putting one finger up as they spoke to the member of the public on Roman Road, East London, about 10.30am today.

The draconian measures which will change every aspect of Brits’ lives included:

All gatherings of more than two people in public were forbidden – meaning a ban on all social events, including weddings and baptisms

Tens of thousands of non-essential shops were ordered to close

Communal play and exercise areas inside parks will also be shut down, but not parks themselves

Places of worship such as churches and mosques must also shut, except to host for funerals

Greater Manchester Police confirmed no one had been arrested following the incident but confirmed officers were patrolling the city centre.

And Foleshill police in the West Midlands shared a photo of a BBQ today, writing: “Unbelievably, we’ve just had to deal with 20+ people having a BBQ!! Please listen to government advice else this will get worse and will last longer!”

Anyone who flouts the new crackdown will face fines of up to £1,000 or even arrest when cops are given emergency powers.

Police now have the power to issue on-the-spot fines of £30 for meeting, with legislation expected to be passed later this week.

Met Police today confirmed: “Police will be out as usual patrolling the streets of London and will use today to speak to people about the new restrictions to help reduce the spread of COVID-19.

“While we fully anticipate the public and business in London will want to adhere to the new restrictions, if we suspect anyone to be in breach of the restrictions we will speak to them, explain what the restrictions require them to do and ask them to comply in order to help prevent the spread of the virus and ultimately save lives.”