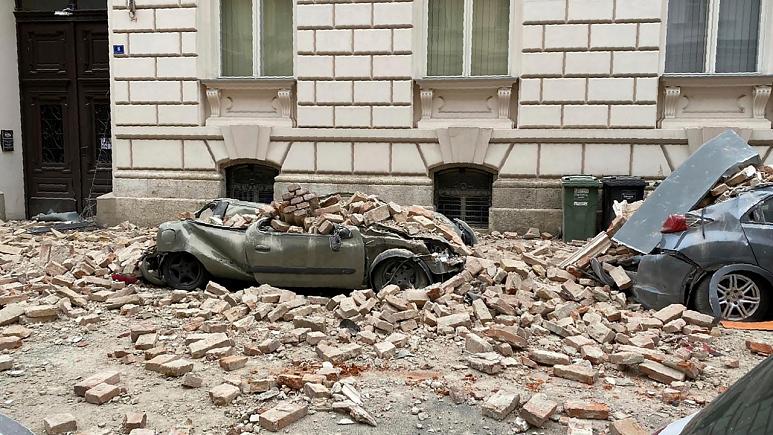 A strong earthquake has shaken Croatia and its capital, causing widespread damage and panic.

The European seismological agency, EMSC, said the earthquake measured 5.3 and struck a wide area north of the capital, Zagreb, at 6:23 a.m. (05:23 GMT) Sunday.

A 15-year-old was reported to be in critical condition, and 16 others were in jured, authorities said.

At least two other tremors were recorded later.

The epicenter was 7 kilometers (4 miles) north of Zagreb at the depth of 10 kilometers (6 miles).

Power was briefly cut as people ran out of their homes and alarms sounded. Several fires were also reported.

Witnesses say several buildings have cracked walls and rooftops have been damaged. Downtown streets were littered with debris.

Zagreb’s iconic cathedral was also damaged, as the top of one of its two spires has collapsed. The cathedral was rebuilt after it toppled in the 1880 earthquake, AP reported.

Officials first said a 15-year-old was killed, but doctors later said that she is in critical condition and that they are fighting for her life. They gave no immediate details on the extent of other injuries.

According to the press agency Hina, citing head of emergency in Zagreb, a child was injured when part of the roof of his house collapsed. The agency does not specify the nature of his injuries.

Firefighters in the Croatian capital have announced that “people have remained buried” in the rubble, according to Hina.

The earthquake struck amid a partial lockdown of the capital because of the spread of the coronavirus.

“This is the last thing we needed besides the coronavirus, that’s what I thought. This morning, it was shaking very hard,” told Neven Horvat, 50, standing in a park in front of his building, to AFP reporter.

People were told to avoid public areas, such as parks and public squares, but had no choice as they ran out of their apartments.

“Keep your distances. Do not gather. We are facing two serious crises, the earthquake and the epidemic,” said Interior Minister Davor Bozinovic, AFP reported.

The Croatian government appealed its citizens to “stay calm” and “keep their distances”:

Health Minister Vili Beros warned people to keep a two-meter “social distance” as requested by decrees passed by the government in an attempt to prevent the spread of COVID-19.

There are 235 coronavirus cases confirmed so far in Croatia, according to official data.