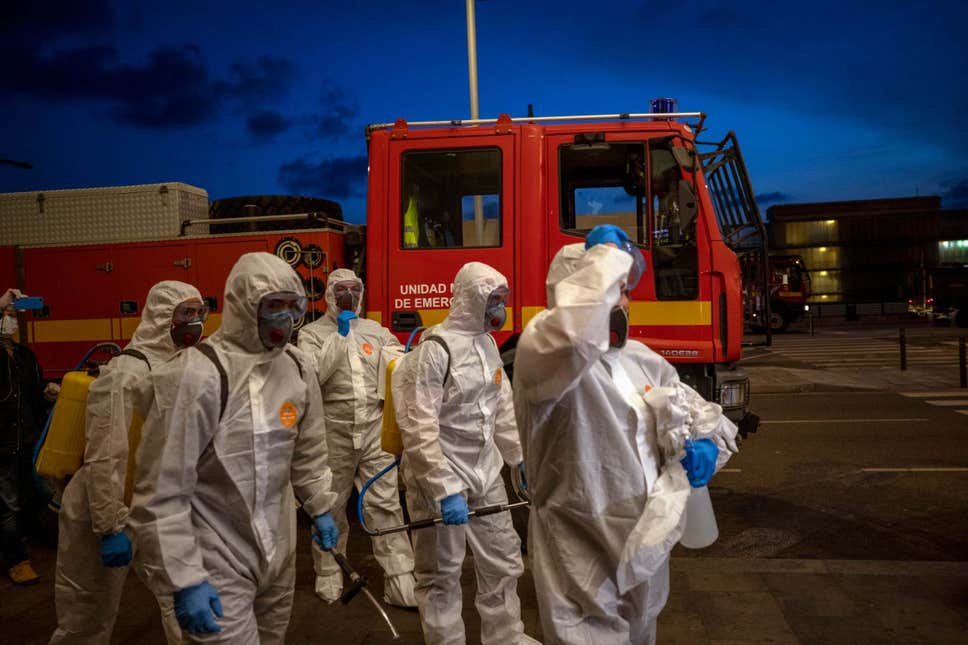 A total of 1,002 people have died in Spain after testing positive for coronavirus, officials have confirmed.

It has become the fourth-hardest hit in the world, after China, Italy which has now become the epicentre of the outbreak, and Iran.

Nearly 20,000 people have been infected in the country, which declared a nationwide state of emergency on Saturday, while 1,588 people have recovered.

It comes after Prime Minister Pedro Sánchez ordered the closure of all hotels and promised to implement special measures in nursing homes, following the surge of confirmed cases.

British tourists holidaying in the country were this week urged to ‘leave now’, after the government said hotels would be on shutdown from next week.

A Foreign Office spokesperson announced on Wednesday: ‘The Spanish government have confirmed that all hotels will close in Spain from Tuesday 24 March.

‘We therefore advise British travellers in Spain to contact their tour operator or airline as soon as possible, to arrange their return journey home before this date.’

UK officials urged Britons to leave, after defiant tourists in Benidorm, Alicante, were filmed ignoring police advice to stay indoors and were seen out on streets drinking and in bars.

A video which appeared on social media last weekend shows a group of around 50 people – some topless, others holding cans of drink – chanting outside a block of flats as officers attempt to get them to go inside.

Spain is currently under a nationwide lockdown, with people ordered to stay at home unless they have to buy food or medicine, or go to work or hospital.

The first of three stages of emergency – a ‘state of alert’ – mobilised the military and gave the government wide-ranging powers, including the ability to confine people and order evacuations.

All cafes, shops, restaurants and bars in the country have been shut and all large public gatherings have been cancelled.

Several airlines have dramatically reduced their flights to Spain, as the FCO advised against all travel globally. Jet2 flights from the UK to Spain have been cancelled and planes were forced to turn back mid-air.

Ryanair also announced it has been forced to ‘severely reduce’ travel to the country.