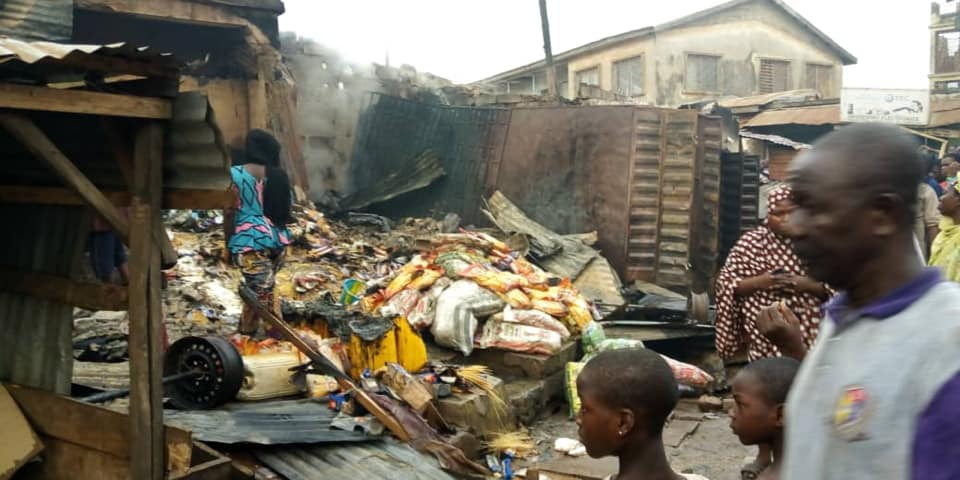 A fire outbreak at the Owode Market in Offa, Kwara State on Tuesday morning has left 23 shops and goods worth millions of naira destroyed.

The fire was said to have started at 1am, before the Kwara State Fire Service was contacted had engulfed many shops.

The Service said the arrival of firemen stopped the inferno from spreading to other shops and houses in the vicinity of the market.

Though the cause of the fire was yet to be ascertained, the Service said it might be due to electricity surge in the area.

Head of Media and Publicity of the Kwara Fire Service, Hassan Adekunle, said that though the intelligence unit of the Fire Brigade was working to know the immediate and remote causes of the fire outbreak, he suspected that electric spark might be the cause.

“Today inferno was at Owode Market, Offa, Kwara State. It started around 1:00am and before they were able to reach fire Brigade many shops have really engulfed already. But immediately the State Fire Service arrived, the fire was initially prevented from further spreading to the other shops in that vicinities before it was later put under control.

“And if not because of the quick intervention of the Fire Brigade, the disaster would have been a great one. Though about 23 shops were affected due to the little delay in calling fire Brigade.

READ  What does Belgium celebrate on its National Day?

Meanwhile, Kwara State Commissioner for Local Government and Chieftancy Affairs, Hon Aisha Ahman-Pategi said that she sympathized with the victims of the inferno at the market.

In a statement signed by the press secretary to the ministry, Oba Azeez, the Commissioner expressed shock over the incident and commiserated with the Olofa of Offa, Oba Muftau Gbadamosi and the people who lost valuables to the fire, saying that she understood what this tragedy means to the victims, Offa LG and Kwara State at a time of economic recovery in Offa.

Ahman Pategi noted that Offa LGA is one of the industrial hubs of Kwara state and the importance of the market to the local community and the state cannot be overstated. She prayed that “Allah puts succour in the hearts of those who lost valuables.”

The Commissioner also advised caution in using electricity and items that are hazardous which could ignite fire. She also pledged that the government would work with the community and concerned authorities on how to assist the victims and prevent future tragedies.