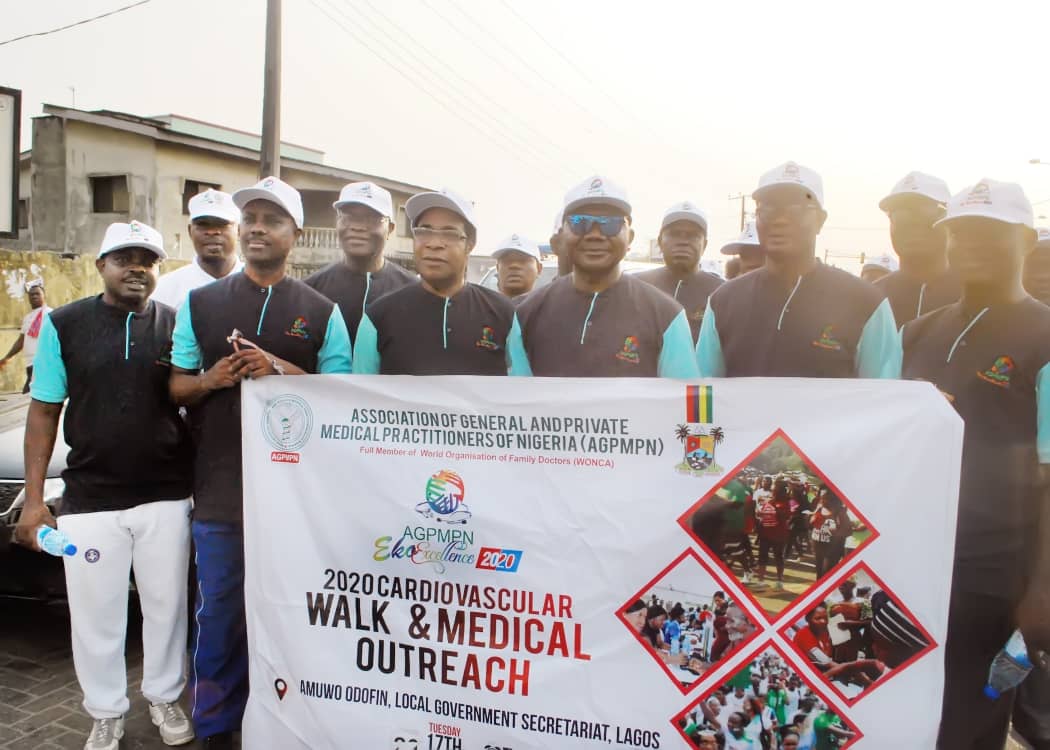 Doctors under the aegis of Association of General and Private Medical Practitioners of Nigeria (AGPMPN), have conducted a medical outreach to sensitise and reduce disease burden among residents of Amuwo Odofin, Lagos.

Dr Tunji Akintade, Chairman, Lagos State Branch of AGPMPN, made this known during the Cardiovascular Walk and Medical Outreach on Tuesday in Lagos.

Akintade said the outreach was to raise awareness on the need for citizens to imbibe exercise as a form of lifestyle modification to prevent non-communicable diseases like hypertension, stroke, among others.

He said the mission, which also includes weight management advice, blood pressure and blood sugar check, would help the association to make informed advisory decisions to policymakers to enhance the health status of residents.

According to him, the health intervention is a form of Corporate Social Responsibility and part of activities to mark the Association’s forthcoming National Conference, which will hold on March 19.

Akintade, however, complained that the health-seeking behaviour of the residents was low, saying that the turnout at the sensitisation and screening venue was below expectations.

He urged the public to have a positive attitude to medical checkups.

The association chairman urged the government to start working on policies that would prevent and reverse the incidence of deaths arisen from cardiovascular diseases.

Akintade added that the prevalence of cardiovascular diseases had impacted, not only on the health of the citizens but also on the nation’s economy.

Also, Dr Iyke Odo, National President of AGPMPN, said that the outreach was to sensitise the populace on key indicators to observe in their health.

“It is to show them that doctors care about their wellbeing; we are not just there to make money, but to reduce the burden of the disease in the society.

“We hear about recurring incidents of sudden deaths, people slumping in their offices, and when such happens, we blame spiritual enemies, but most times, it is heart failure,” he said.

Odo said that it was important for Nigerians to avoid a sedentary lifestyle, engage in brisk walking of about 30 minutes, three times in a week to keep the blood flowing and the heart-healthy.

Commenting, Mrs Olusola Hassan, Lagos State Health Educator, said that everyone should endeavour to engage in exercises that suits them best.

Commenting, the Chairman, Amuwo Odofin Local Government Area, Mr Valentine Braimoh, said preventive healthcare was the best, adding that early diagnosis of an ailment was not a death sentence.

“Lots of people shy away from medical checkups because they are scared of knowing their health status; knowing your health status will help you have the right mindset and take necessary precautions,” he said.

Also, Mojisola Alli-Macaulay, representing Amuwo Odofin Constituency, Lagos State House of Assembly, said her partnership with AGPMPN was to improve the health of members of her constituency.