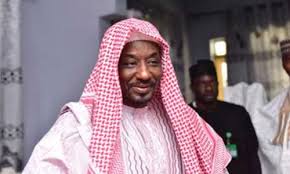 The dethroned Emir of Kano, Muhammadu Sanusi has spoken about how he feels about his dethronement.

According to a report by The Nation, the dethroned Emir of Kano, Muhammad Sanusi has revealed that God almighty approved his removal from the throne by Kano state government.

He stated this on Friday in Awe while leading Friday Muslim prayers at the place of the emir of awe with the Kaduna state governor Nasir El’Rufai in attendance.

Sanusi during the prayers urged Muslim faitgful to always obey God and accept his judgement in whatever happens, adding that whatever happen to anyone of them is destined by God to happen if not there is no way it would happen.

He explained that there is no way anything that God has not destined would come to pass.

He underscored the need for Nigerians to also continue to pray for peace and progress of the country.

The dethroned Emir also urged Muslims to fear God in all their activities, reminding them that every one of them must give account of his or her deeds hereafter.

The Kaduna state governor Nasir El-Rufai who was in Awe to visit the dethrone Emir arrived the Emir’s residence at about 12:45pm and was received by the dethroned emir where they quickly went into a close door meeting , after which they drove straight to Friday mosque.

Our correspondent gathered that it was the first time Sanusi was allowed to make his first public speech after he was dethroned by the Kano State Government and banished to Nasarawa State.

READ  Covid-19: New cases coming down, but hospital admissions and deaths are rising

Those that attended the prayer includes; Governor Nasiru El-Rufai of Kaduna State, Emir of Awe and his Shabu counterpart Mohammed Bwala.

There was heavy security presence during the prayer as armed policemen and other security personnel were deployed to safeguard the environment.