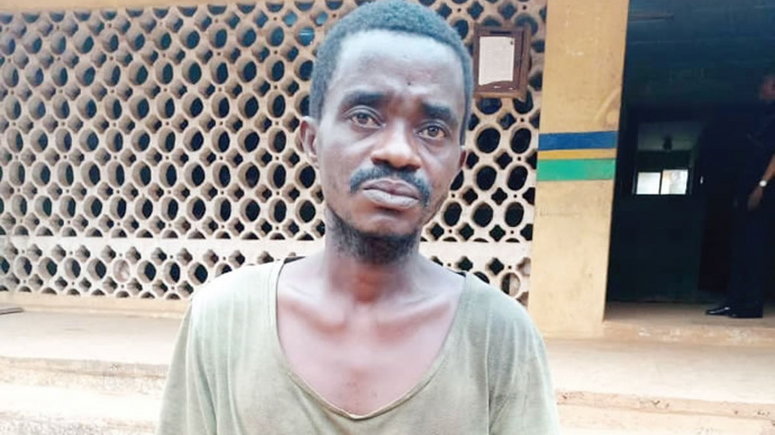 It was anger that made me stab her to death” was the confessional statement of a 27-year-old murder suspect, Ejike Eze.

An Ebonyi State indigene, Eze had lived in the Ayegbami area of Ijebu Ode, Ogun State for about four years dealing in scraps. The house where he lived was a bungalow with a large compound populated by people from the Igbo and Yoruba tribes.

Penultimate Friday morning, he committed an act that threw his neighbourhood and the entire community into confusion and panic when he killed a 59-year-old neighbour, Mrs Adeyigba Oladipo.

It was gathered that Eze and Oladipo had always been at loggerheads and that day, the woman accused Eze of stealing her phone.

The accusation infuriated Eze, who allegedly attacked his accuser, killing her in the process. Upon committing the act, the suspect reportedly fled the scene. But two days after, he was arrested by the police at a motor park in Ijebu Ode heading for his hometown.

When our correspondent met with the suspect at the Yellow House at the Ogun State Police headquarters, Eleweran, Abeokuta, he looked angry. He was being held in the homicide section of the state Criminal Investigation and Intelligence Department for investigation and prosecution.

He accused almost all his neighbours and their children of being his enemies, saying he was unhappy that he could not kill them all.

He said, “I am here because of a murder case. I stabbed my neighbour whose name I cannot remember again. We lived in the same compound in the Ayegbami area of Ijebu Ode, Ogun State.

“The deceased (Oladipo) used to accuse me of stealing her property and whenever she accused me, other co-tenants used to support her. They would all abuse and shout on me.”

Narrating how the murder happened, Eze said, “On that day, the woman (Oladipo) accused me of stealing her phone and I got angry. The next thing I thought of was to attack her with a machete. That was the main reason I killed her.

“It was around 5:30am that Friday when I heard her abusing me in Yoruba, calling me ‘omo rada rada’ (useless child). I was angry and I stabbed her on the head. She had an injury on the head and she was shouting for help. One of the neighbours wanted to come to her rescue, but I chased that one away.

“If I had the opportunity of seeing the other neighbours, I would have also attacked them with a machete and killed all of them. I even ran after one of them who wanted to fight me after I killed the deceased, but he escaped. It pained me that I did not catch him. If I had, I would have killed him too.”

Asked why he didn’t make efforts to save his victim’s life, Eze said, “I left her corpse on the floor and I ran to the Sagamu-Benin-Ore Expressway. I slept somewhere on the road for two nights before the police arrested me.’’

The suspect said he had a long time ago requested to be ejected from the house because he felt he was a stranger among the residents, including two who were from his tribe.

“I had told them to send me out of the house if they did not like me rather than accusing me wrongly,” he said.

On how he felt killing a human being, he said, “I don’t feel anyway. What I did is not worth the reaction of the people. But it was anger that made me stab her to death. Initially, I had gone to report them at the police station, but the police officers begged me and they settled the dispute among us.

READ  “Don’t Use Me To Judge Other Pastors,” 57-Year-Old Pastor, Who Impregnated Two Underaged Sisters

“How would I be happy with the people who maltreated me daily? I was expecting them to complain about me to my cousin who got the house for me but they did not. All my enemies are many in that house, including their children. The children in that house also copy the behaviour of their parents towards me. If possible, I would have killed every one of them. I had prepared to fight an unending battle with them.

“The two Igbo people there are also my enemies. They are Igbo like me and people used to call them my brothers, but I don’t care if they are my brothers or not. They are not good human beings at all. They used to threaten me. What they used to do to me in that house is really frustrating.”

Ironically, Eze said since being in police detention, it had dawned on him that he was in a big problem.

He said, “I am not feeling happy because I know I have put myself in a big problem. I am not feeling normal here at all. The police should do whatever they want to do to me but I don’t want them to kill me.

“They should call my neighbours and my cousin who got the house for me last October to ask them how many times I had complained about the way they treated me in that house.”

The state Police Public Relations Officer, Abimbola Oyeyemi, said Eze was arrested at Mobalufon Junction motor park at Ijebu Ode, where he wanted to board a bus to his village, Onueke in the Eza South Local Government Area of Ebonyi State.

Oyeyemi said the suspect would have escaped if not that the police got a hint from the deceased’s younger brother who had reported the murder at the Obalende Police Station.

The PPRO said upon receiving the report, the Divisional Police Officer at the Obalende station, CSP Omonijo Sunday, mobilised some detectives to the scene, where the victim’s corpse was recovered and taken to Ijebu Ode General Hospital mortuary for autopsy.

Oyeyemi said, “Serious manhunt was launched for the fleeing suspect. The efforts of the detectives yielded a positive result on March 1, 2020, when the suspect was about boarding an Ebonyi State-bound vehicle but was apprehended by policemen who had already laid an ambush for him based on the intelligence they already had on him.

“On interrogation, the suspect confessed to killing the deceased with a machete because she accused him of stealing a phone. He confessed further that he cut off the woman’s two hands because she wanted to struggle with him to collect the machete.”

Oyeyemi said the police had taken over the matter and was not concerned about whether the deceased’s family wanted to prosecute the matter or not.

Several attempts to speak to the deceased’s family did not succeed even as they were said to still be in shock over the incident. The neighbours refused to speak about the incident.