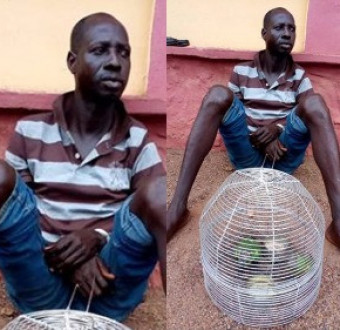 A 40-year old man, Olanrewaju Adeyinka, has been arrested by men of the Ogun State Police Command for allegedly stabbing his younger brother, Gabriel, to death with a window louvre for bringing two life parrots home.

Olanrewaju was paraded on Thursday alongside 48 other suspected criminals by the state Commissioner of Police, Kenneth Ebrimson, at the state command headquarters, Eleweran, Abeokuta.

The suspects were apprehended for various offences, including murder, robbery and kidnapping, among others.

While speaking with journalists, Olanrewaju said he mistakenly stabbed his brother, who brought two strange parrots into their home in the Ilaro area of the state.

The suspect explained that a fight ensued between them after Gabriel refused to take the birds out of the house.

He stated that while struggling with his brother, he pulled a broken louvre and stabbed Gabriel to death.

Olanrewaju said, “It was my brother, who brought them home, but I insisted that he should not put the birds in our house. I asked him to take the birds away from the parlour and keep them outside and that was how a fight started between us.

“He came to my room and started fighting me. It was during the fight that he broke my louvres.

“It was the broken louvres that I intended to take outside to show our neighbours when he attacked me again that I ended up using to stab him to death.”

Olanrewaju, however, said he regretted his action, describing it as the devil’s handiwork.

He also appealed to the government to pardon him so that he could take care of his surviving younger brother.

He added, “I regret what I did and I can’t justify my action. It is the devil’s work; the government should assist me anyhow they want to.

“We are three siblings and lost our parents long ago and I have mistakenly killed one. The government should come to my aid so that I can take care of the other one.”

The CP said the command had arrested 48 suspected robbers, cultists, kidnappers, fraudsters and murderers, among others.