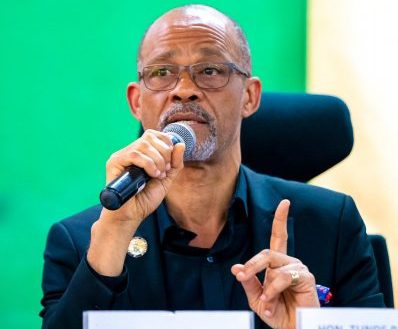 The Lagos State Commissioner for Health, Prof. Akin Abayomi, has said the Italian being treated for coronavirus at the Infectious Disease Centre, Yaba, is depressed although getting better.

At a briefing on Thursday, Abayomi said the Italian, who had been at the centre for one week, was responding to treatment, but would only be released when he would no longer be a threat to the other members of society.

“The Italian has been with us for one week now; his clinical situation is quite stable, the symptoms are dramatically resolving; so, we are expectant that we will continue to make this kind of progress.

“Sometime over the weekend, he developed a respiratory symptom, and we initiated some therapy in the form of ant-viral, which are not curative, but just to make it easier for his immune system to fight the infection. He seems to have responded to that; so we are keeping him on that and there are no side effects.

“As of today (Wednesday), he is in a better spirit; he requested psychosocial support as he was getting a bit depressed because he is in isolation. He is the only person in the ward, and of course, very few visitors, because his family is not in Nigeria.

“His last viral load, which is the measure of the virus in his body, shows that the level is going down. If that trend continues he will be better. I can’t give the precise estimate in terms of the date that he will be released, it may not be long, perhaps another week. As soon as he is not secreting the viruses, that means he is no longer contagious. However, to be safe, after we get the first negative, we wait a few days and repeat it and if the second test is negative then we are confident that he can return to the community without posing a danger to other people,” Abayomi said.

The commissioner added that two passengers onboard the Turkish Airlines with the Italian were still missing.

“As regards the number of people we are trying to identify, as of the close of work on Wednesday, we have 15 people who are yet to be identified. Out of the 15, we have been able to identify 13 of them as of Thursday. That means we are looking for two more people onboard the flight that brought the Italian, excluding the 65 who have travelled out of Lagos.

“If I can’t find those two people between now and tomorrow (Friday), I will be asking the press to help me put the information about them in the media. I’m trying to hold back their information for the sake of privacy,” he said.

Abayomi added that a Nigerian who returned from France on Monday was in isolation at the Infectious Disease Centre, Yaba.

He said the patient was referred to the Infectious Disease Hospital by a private hospital in Lagos.

“He is a Nigerian who went to France, spent seven days there, returned to Lagos three days ago (Monday) and presented with headache and some respiratory symptoms. Because he has been in a country where there is an active person-to-person transmission, it could be common cold and there is a possibility it could be coronavirus. He has been put in isolation and the test is being run right now; I am expecting the result,” Abayomi said.