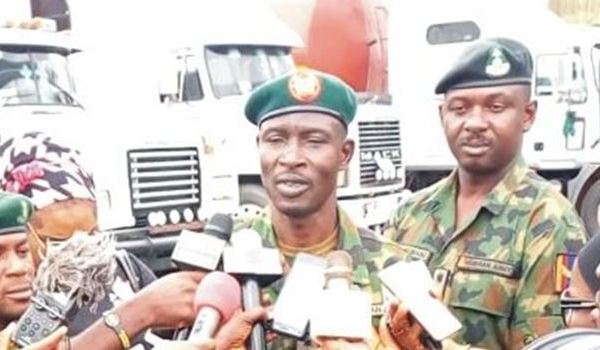 The Nigerian army says 19 Boko Haram insurgents were killed during an exchange of gunfire on Wednesday in Damboa local government area of Borno state.

In a statement on Thursday, Aminu Ilyisu, army operations media coordinator, said the insurgents attempted to infiltrate the troops’ location from three different fronts in the early hours of Wednesday.

He said the insurgent suffered “a crushing defeat’ in which over 19 of them were killed while others fled with various degrees of injuries.

But he said three soldiers were killed in the attack while four others were wounded in action.

He added that five AK-47 rifles, one general-purpose machine gun and one rocket-propelled gun tube were recovered from the insurgents.

“A misguided attempt by some criminal Boko Haram elements to attack the troops of 25 Task Force Brigade (Army Super Camp 2) located in Damboa LGA of Borno State has met a crushing defeat in the hands of the resilient troops,” the statement read.

“The marauding criminals mounted on gun trucks and with a number of their foot soldiers attempted to infiltrate the troops’ location from three different fronts in the early hours of March 4.

“The troops responded swiftly, bringing to bear superior firepower against the criminals in conjunction with the Air Task Force of Operation Lafiya Dole.

“The encounter which lasted for over an hour witnessed one of the most debilitating defeats of the Boko Haram criminals in a single encounter since the turn of the year.

“So far, 19 Boko Haram criminals’ bodies have been recovered. Some of the insurgents were observed escaping with various degrees of gunshot wounds by the troops who are on vigorous exploitation of their initial success along the criminals’ withdrawal route.

“Regrettably, three valiant soldiers paid the supreme prize while four others were wounded in action. However, the wounded soldiers were evacuated to a military medical facility for immediate and effective management.”