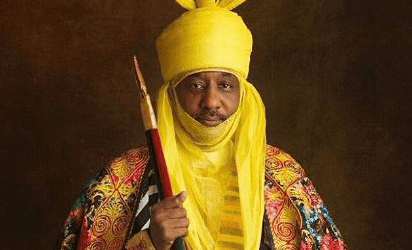 The Emir of Kano Muhammadu Sanusi ii failed to appear before the Kano Public Complaints and Anti Corruption Commission on the instance of his Lawyers advice, but the Commission insists he must appear before it.

The Emir’s Legal teams have asked the Commission to give them up till 25th March 2020, but the Commission rather shifted the date for the Emir to appear before it to answer alleged Corruption charges.

The Commission in response to the Emir ‘s lawyers drew the Emir attention to the Court of Appeal decision which affirmed the Kano High Court decision that settled the powers of the Kano Anti Corruption Commission to investigate allegations of Corruption against any Person in the State.

The Commission Chairman, Barrister Muhyi Magaji Rimin Gado who spoke in response to the Emir stand against his invitation and also who made clarification on the investigation, said, “the powers of the Commission to investigate anybody was vested in a case decided between Kano State Public Complaints and Anti Corruption Commission.

Muhyi noted that this particular invitation and the Corruption charges on the Emir was completely different from the one stopped by a Court of law, adding that this case involved allegations of selling of three of the Emirate Council plots of land at Darmanawa phase one and two and also at Bubbugaje whose amount N2.26 Billion.

The Chairman said that investigation revealed that all the alleged illegal transactions for the sales of landed properties done by the trio of Shehu Muhammad Dankadai Sarkin Shanu, Sarki Abdullahi Ibrahim Makaman Kano and Mustapha Kawu Yahya Dan based on the alleged instruction of the Emir necessitated the call for him to appear and make clarifications.

” I wish to categorically note that the Commission is entering a new investigation brought forward by a Whistle blower on 29th December 2019 and is not related to an earlier investigation which is still subject matter of civil suit”.

Muhyi insists that the Emir Must appear before the Commission but with a leverage of coming with his lawyers to be present during the interview on the Emir on.9th March 2020.