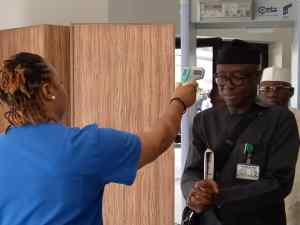 Ministers were screened for coronavirus on Wednesday ahead of the Federal Executive Council meeting by the State House.

Their body temperature was checked as they arrived at the Presidential Villa for the meeting about 10.23 am.

They were also given hand sanitisers to disinfect their hands.

The ministers were screened twice.

The first screening took place as they alighted from their cars and entered the main reception to Villa.

At the entrance to the Executive Council Chambers, another screening took place before they finally entered the venue for the commencement of proceedings.

Permanent secretaries and other officials from Ministries, Departments, and Agencies, who came for the meeting, were also thoroughly screened.

On Wednesday (today) that the screening started fully on Tuesday when all workers and visitors to the Presidential Villa were asked to go through the process.

The President, Major General Muhammadu Buhari ( retd. ), is presiding over the FEC meeting.

The Vice-President, Prof Yemi Osinbajo; the Secretary to the Government of the Federation; the Head of Service of the Federation, Mrs Folasade Yemi-Esan; and the National Security Adviser, Major General Babagana Monguno ( retd. ), are also attending the FEC meeting.