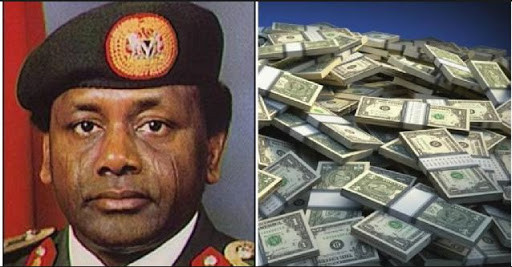 …the lies about payment of $100million compensation to Bagudu

Indications have been emerged as to the real reason the United States Government is stalling its earlier commitment to help Nigeria repatriate $308 million from the British Island of Jersey.

The money was part of the billions of dollars traced to late General Sani Abacha, Nigeria’s former military Head of State who ruled Nigeria from November 1993 till his sudden death in June 1998.

According to Sources in the know and documents made available to the media over the weekend, the United States’ efforts at stalling the repatriation of some of the Abacha loot may be nothing but an indication of its age long posturing as a “global police” even when clearly in breach of Nigeria’s sovereign rights.

In an obvious infringement of Nigeria’s sovereignty, the United States government was said to have insisted on the Nigerian government presenting it with a list of projects it plans to spend the $308 million on.

Some senior lawyers said to have been consulted by Abubakar Malami were said to have kicked against this request as an insult and affront on Nigeria’s sovereignty considering the said money belongs to Nigeria in the first place. But a bid to ensure the federal government does not play into the hands of the US government, the Buhari administration was said to have hurriedly submitted the second Niger bridge, the Lagos-Ibadan expressway and the Abuja-Kaduna-Zaria-Kano expressway as three of the projects to be completed with the recovered money. “With the bizarre condition met, the Buhari government was sure the funds would be repatriated as promised by the United States government”, a Source said.

But in a strange twist, shortly after the agreement was signed in the US, Bloomberg wire service reported that officials of the US Department of Justice (DoJ) were kicking against “plans by the Nigerian government to return $100 million to Governor of Kebbi State, Atiku Bagudu who has been helping the Nigerian government with the recovery of some of the said funds”.

The Bloomberg report then claimed that paying the money to Bagudu “may hamper future cooperation between the two nations (US and Nigeria) to recover state money moved offshore by Abacha”. The Bloomberg report therefore insinuated that Nigeria would get only $208 million from the latest repatriation while Bagudu would be paid the balance.

This twist jolted the Nigerian government as Sources close to the agreement with the US government said, at no time did the issue of a “commission” to Atiku Bagudu discussed at the meetings held with the Department of Justice raising real suspicion that the US government may afterall not be interested in returning the recovered money to Nigeria and may have resorted to a mere subterfuge to stall the payment. Not even the assurance of Abubakar Malami that Bagudu would not be paid a dime from the funds recovered from the Abacha family has made the United States to reconsider its stance.

READ  End of the road for mystique Gana

It would be recalled that in1999, the Nigerian government hired Enrico Monfrini, a Swiss lawyer, to launch legal proceedings to recover assets traced to late General Abacha, his family and associates in Switzerland, France, Jersey, the UK and other jurisdictions. The assets of Bagudu, who was an associate of the Abacha family, were then frozen along with those traced to the Abachas.

However, to prove his innocence and protect assets he had acquired prior to his relationship with the Abacha family, Bagudu initiated a series of civil proceedings against the federal government over the freezing of the investment portfolios held by his company, known then as the Ridley Group.
In 2003, after a series of litigation, President Olusegun Obasanjo decided to resolve the issue out of court by entering into an “original settlement agreement” with Bagudu and a “global settlement agreement” with the Abachas.

The agreement, dated August 21, 2003, was subsequently approved by a UK court and registered with the National Crimes Agency (NCA). Section 12 of the agreement is said to have stated that, “this Agreement is governed by English Laws, and the English Courts shall have jurisdiction over any disputes arising out of or in connection with it.” The agreement and its endorsement by a UK court, according a Ministry of Justice Source may not have gone down well with the United States government.

In 2004, Bagudu’s previously disputed assets in Ridley, his old company, were settled in new companies under Blue Trust, and he continued to do business in the UK until a twist occurred sometime in the year 2013.

In breach of the subsisting agreement signed by the Nigerian government, Mohammed Adoke, Nigeria’s Attorney General under the Goodluck Jonathan administration on August 28, 2012, was said to have written another “Letter of Request” to the US Department of Justice requesting its support to recover more Abacha loot. This step must have gladdened the US government as the Department of Justice acting on Adoke’s letter promptly filed a criminal case at a District Court in Washington DC on November 18, 2013 against Bagudu’s companies as part of the claim against the Abachas.

Subsequently, on February 25, 2014, the assets of Bagudu’s Blue Trusts were frozen by the English Commercial Court based on an exparte application filed by DoJ hinged on its money laundering proceedings in DC.

Bagudu’s lawyer, Ricky Tarfa was said to have written to Adoke on March 12, 2014 reminding him that government was a continuum and that his action was at variance with the agreement reached with the Obasanjo government in 2003. Bagudu’s lawyers thereafter filed an appeal against the freeze in the UK and it was upheld by the Court of Appeal on the ground that the procedure followed by the US was wrong. The judgement was seen as a bad defeat for the United States in “its expansionist posturing.”

Perhaps desperate to ensure that assets were never released to Bagudu, the US switched gear from from the civil case it had earlier filed to writing the National Crimes Agency (NCA), the UK agency of government responsible for economic crimes across regional and international borders, to request that the assets held by Blue Trusts be frozen. The DoJ hinged its new action on the claim that, some of the transactions which passed through US banks and were carried out using US dollars and so should be considered as “the fruit of a poisonous tree”.

On April 16, 2014, Bagudu and his companies filed a Settlement Agreement Claim against Nigeria in the UK over the non-compliance with the 2003 agreement. Sensing he might have played into the hands of the US government, Adoke again wrote to the US Department of Justice clarifying that Blue Trust assets were not part of the Abacha loot to be recovered.

Adoke’s letter of June 16, 2014 to the Asset Forfeiture Money Laundering Section of the DoJ clarified that by the terms of the August 21, 2003 Settlement Agreement between Bagudu and Nigeria, “the Federal Government of Nigeria has no claim” over Blue Trust assets. He said Bagudu and the Blue companies were entitled to keep the assets under section 7.8(b) of the settlement agreement.

The clause says Bagudu and his companies shall hold the assets “free from any claims existing or future, direct or indirect, contemplated or otherwise by the FRN or in whole or part at its behest or on its behalf or for its benefit”.

According to a Source close to the Jonathan administration, “by the time Adoke’s letter was written, the deed had been done. The DoJ did not honour Adoke’s letter, insisting that the Obasanjo deal was not binding on the US.” Bagudu’s assets have since remained frozen.

READ  2019 presidency: We are back to do-or-die politics – Ijaw youths

In April 2015, Bagudu was said to have made another recourse to the High Court in the UK arguing that Nigeria had violated the 2003 agreement considering that the freeze order was based on a letter of request from the Jonathan government in 2012. The court was reported to have entered a default judgement against the Nigeria on July 8, 2015.

Nearly three years later, the federal government entered into a revised agreement with Bagudu on October 26, 2018, a copy of which was circulated to the media over the weekend.

In the agreement, the federal government, Bagudu and Blue companies said they had decided to resolve the settlement agreement claim “without further proceedings or dispute”.

Significantly, the agreement also stipulated that the frozen assets, which are now said to be worth about $155 million, should be returned to the federal government as the legal owner “subject to the terms of this agreement”.

It also provided that the federal government “will hold the same free from any claims existing or future, direct or indirect, contemplated or otherwise, made by the Blue Family Trusts, Atiku Bagudu or his affiliates, in whole or in part, at their behest or on their behalf or for their benefit or purported benefit, while compensating the Blue Family Trusts and Atiku Bagudu for the Settlement Agreement Claim”.

The market value of Blue Trust assets held in accounts at Waverton Investment Management Limited and James Hambro & Partners LLP, among others, were valued at €141 million, out of which Bagudu and affiliates were mandated to pay a tax of €42 million to the Federal Government of Nigeria.
However, with the freeze order on Bagudu’s assets in the UK yet to be removed because of DoJ’s criminal proceedings in DC, the dispute may not be ending soon.

While the Bloomberg report was ostensibly done to link Bagudu with the $308 million that is about to be repatriated from Jersey, the report itself has raised doubts about the United States government’s sincerity to really release the funds to the Buhari government.

While the US Department of Justice has classified Bagudu’s assets as “fruits of a poisonous tree”, it has not been able to get a strand of evidence to get a forfeiture order against Bagudu in either the US or UK.

While the game continues, it is clear Nigeria is the real loser in the game being masterfully played by the US Department of Justice.