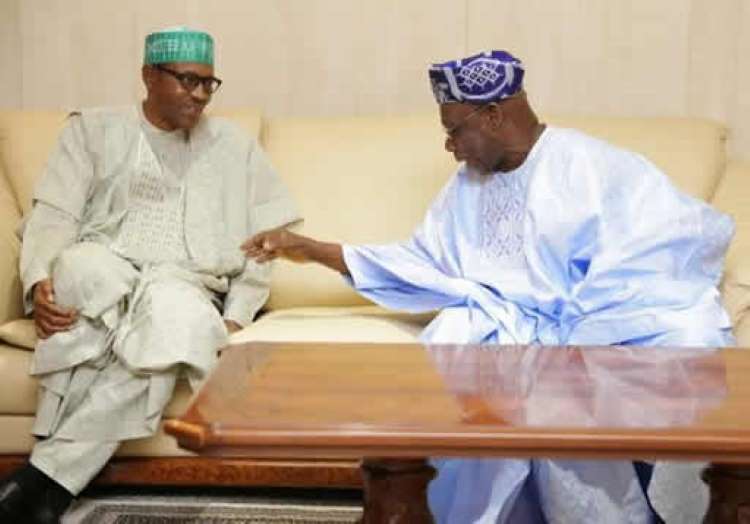 Former President Olusegun Obasanjo has said the present government needs to heed the agitations of those clamouring for restructuring before such agitations develop into self-determination.

Speaking in Lagos on Saturday at the first memorial lecture organised in honour of the founder of the Oodua People’s Congress, Dr Fredrick Fasehun, the former President advised the President, Major General Muhammadu Buhari (retd.) to heed the call now before it would be too late.

He said Nigeria could not afford to be plunged into another war because the nation might not survive the second civil war.

Obasanjo, who said insecurity was a major concern in Nigeria, commended the South-West governors for establishing the Western Nigeria Security Network popularly known as Operation Amotekun.

He particularly commended Oyo State Governor Seyi Makinde “for his leadership on this matter and for sharing their thinking with me.”

The former President said no section of the country should think it would be easy to quell any other region that might want to secede if the agitation for restructuring was not addressed.

He stated that the agitation while he was in office was for true federalism but now it had changed to restructuring.

He said, “President Goodluck Jonathan’s effort of a National Conference did not even get to the National Assembly. Today, the agitation has moved up to restructuring. Thanks to Buhari’s administration and its impunity and all. With the fractional political division, poor management of the economy, the non-protecting security and the politics of uncertainty in the land, we should not allow restructuring agitation to degenerate to self-determination.

“There is still a window of opportunity for us to nip in the bud a possible and indeed likely agitation for self determination that will be violent, destructive and all-empowering. We have descended to lack of civility bordering on uncivilisation, indignity, mutual disrespect and crudity in the language of our debate, dialogue, discourse, address, comments and remarks across tribe, section, religion, region, ethnicity and community.

“If not halted, it will degenerate and poison the atmosphere to the tipping point or point of no return.”

Obasanjo, who played an active part in the Nigerian Civil War, said the military then planned that it would crush the Biafran soldiers between three and six months. He, however, said Nigeria almost lost to Biafra but managed to defeat the agitators after 36 months.

He said, “And before we descend any further, let me warn, from experience, those who are beating the drums of war and domination from all quarters. I joined late Bisalla, under General Hassan Katsina, to write the appreciation and the operational instruction for the (Nigerian) Civil War.

“We estimated that Federal Government would suppress the Biafran rebellion within three months. To make allowances for the unforeseen, we allowed six months. But it took us 30 months, five times what we allowed for, and what is more, we nearly lost the war. And as a field commander at the end of the war, I can attest that we fought with all Nigerian tribes, including Igbos against Biafra.”

He said the National Assembly appeared to be aware of the lurking danger and wanted to be proactive but he said the constitution did not give them the power to write a new constitution but to amend the existing one.

“What is required is a new constitution to meet the agitation and aspiration of all Nigerians and to allay all fears. The executive and the legislature need to work together to establish a Constituent Assembly.

He continued, “And if after over 10 years of fighting Boko Haram, the terrorist group is still waxing strong, let nobody out of self-delusion think that a war of self-determination by one or more geopolitical zones of Nigeria with the present disenchantment would be easily suppressed by the rest of what may remain of the country.

“Some will fight to the last drop of the blood of their group rather than suffer the indignity of slavery, oppression, domination and atrocious injustice in the land of their birth and the only one that they can call their country.

“If Boko Haram can get an outside support, any geo-political zone opting for self-determination may equally get an external support. War may not necessarily go as planned, estimated and predicted. “Everything must, therefore, be put in place to avoid a war, the end of which no one can precisely predict.

“There is no assurance that Nigeria can survive a second civil war. But rather, we should seek political solution and avoid a destructive civil war.

“This is the situation today. Let us put our experiences to work and fashion out a political order and arrangement that will strengthen our togetherness while making room for healthy and useful competition within the one entity, Nigeria.

“We need not go the way of Yugoslavia or Sudan and certainly not the way of Rwanda and Somalia. But none of these countries knew the avoidable and divisive end from the beginning. Let us learn from the experience of others and of our founding fathers who resolved their political differences through dialogue and debate without resorting to violence and separation but accommodation, telling themselves hard truth, tolerance and give-and-take spirit. That was the foundation of Nigeria at independence and let it continue to be.

“If all we are interested in is power and not holding the country together harmoniously and wholesomely, we may hold the mirage of power and lose the nation or the country bequeathed to us by our founding fathers.

“Today, we can still collectively debate, dialogue and lead our country to where, by consensus, we will want it to be as a united, strong, harmonious, dynamic, fast developing, productive, fast growing and progressing nation with sufficient leeway for autonomous development and management by component units on the basis of healthy competition, mutual respect, caring and sharing for one another, within one nation and one destiny, with shared values, common goals and venerated diversity.

“There are still people of goodwill who can speak up and speak out and take effective and positive actions individually and collectively that will corporately save the country from rudderlessness and disintegration. We must allow a stitch in time to save nine, so that we are not pushed to the realm of the unknown and which may be for all of us, undesirable.”

The National Publicity Secretary of the Arewa Consultative Forum, Anthony Sani, who spoke before Obasanjo, said although there was no harm in restructuring, he said he did not believe the time was ripe for restructuring now.

The new President of OPC, Prince Osibote, expressed worry about the insecurity in the nation.

Osibote said, “We are saddened by the state of insecurity in the land. The challenge is exacerbated by unbridled poverty, illiteracy and ignorance coupled with lack of vision and character by a section of the Nigerian political class.

“We frittered away ample opportunities that came our way to consolidate on our strength, human capacities and natural endowments.

“We unambiguously denounce the spilling of blood in the land, banditry, abduction, and other forms of heinous crimes that have almost made life miserable in some parts of the country.”

One of the children of the late OPC founder, Olubunmi, appreciated those present at the ceremony.

He said, “I want to appreciate you all for coming to honour our late father. We now know that you loved our father when he was alive. “