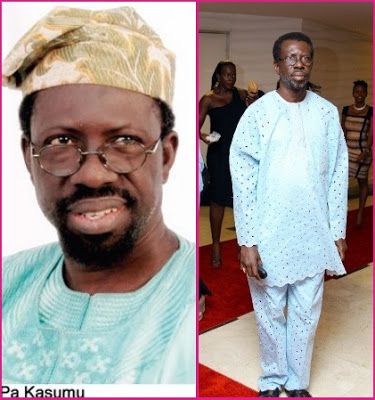 According to report getting to OYOGist.com, veteran Nollywood Actor Pa Kasumu has reportedly died on Sunday, 1st of March, 2020. His death was announced by one of his colleagues in the industry.

The sad news of his death was announced by actress, Foluke Daramola in a statement on her Instagram page on Sunday evening, with a statement she released:

“It is with so much heavy pain in our hearts that we regret to announce ur in Para, that our #paraafricafoundation model actor Pa kasunmu has given up the ghost after a brief illness.

“The news was broken by a close source that stays around the hospital he gave up the ghost. We will keep u updated with further information on this” The Nollywood actor has suffered a long illness that, made people believe that he was blind at some point. During the time of his illness, his colleagues who met him in his condition at the time were moved to tears, after seeing his poor state of health. At some point, Pa Kasumu was wheelchair-bound and had to rely on the support of his loved ones to move around. He reportedly said at a certain time that his ill-health was a spiritual battle.