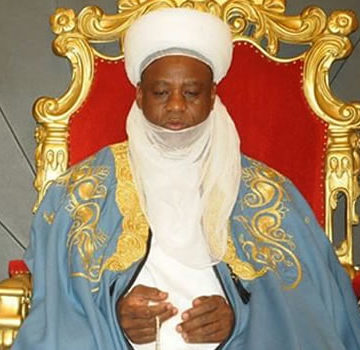 His royal highness, the Sultan of Sokoto, Alhaji Sa’ad Abubakar lll, has described the situation faced currently in the Northern part of Nigeria as a punishment from God to the country for their misdeeds.

In a security meeting about two weeks ago, the monarch berated the newly established security outfit called ‘Shege Ka Fasa’ in the north which he described as a copy of the South-West Amotekun.

The monarch who was furious with the idea faulted elites in the region, nothing that the whole thing is made up just to score cheap political points.

According to the Islamic ruler, “Nigerians must learn to adhere to the teachings of the Quran and the Bible to escape God’s wrath,” said the Abubakar at the 5th International Conference on “Love and Tolerance: Countering Violent Extremism for Peaceful Coexistence” held in the capital city of Nigeria, Abuja, on Thursday.

Speaking further, the Sultan of Sokoto who was represented by Emir of Jiwa, Dr. Idris Musa, said: “challenge of the insurgency would come to an end when Nigerians stop committing sin.”

“It is part of the punishment we are receiving based on our sins. If we can stop committing sin and abide by God’s words, things will change.

“It is part of the punishment we are receiving based on our sins. If we can stop committing sin and abide by God’s words, things will change.”

He, however, charged Nigerians to leave in peace with each other irrespective religious believer or region.