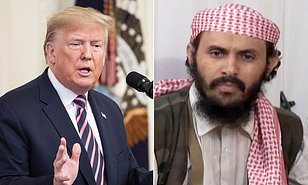 Following the deadly shooting at Naval Air Station Pensacola in Florida where three American sailors were killed by a Saudi Arabia trainee and responsibility of the attack claimed by al-Qaeda leader Qassim al-Rimi, the US military has killed the jihadist leader.

US President Donald Trump disclosed that he ordered the killing of al-Rimi during a counter terrorism operation in Yemen.

While speaking on the incident, Trump didn’t elaborate on when the killing was carried out, he said that the U.S an its allies are safer as a result of al-Rimi’s death.

We will continue to protect the American people by tracking down and eliminating terrorists who seek to do us harm,’ Trump said in a statement.

A $10 million reward for any information leading to al-Rimi’s capture was offered last month by the State Department after al-Rimi’s al-Qaeda accepted responsibility for the naval base attack.

Al-Rimi had said in an 18-minute video posted on Twitter that his group was responsible for the December 6 shooting at the base.