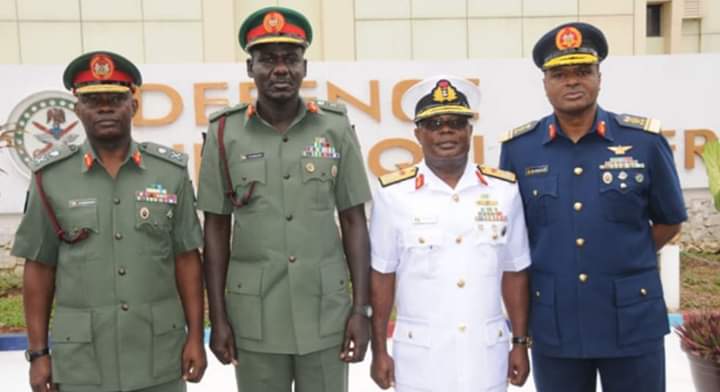 The House of Representatives has called for the resignation of all Service Chiefs following the deteriorating security situation in the country.

This was sequel to the unanimous adoption of a motion by Rep. Mohammed Monguno (APC-Borno) at plenary on Wednesday.

The House urged President Muhammadu Buhari to sack the Service Chiefs, if they fail to resign.

Moving the motion earlier, Monguno said that territorial integrity of Nigeria was being threatened following the resurgence of insurgency in the North East.

Mongonu who represents Monguno/Marte/Nganzai Federal Constituency of Borno said that the attacks by the Boko Haram insurgents in the North-East zone have lingered for more than seven years.

He recalled that when President Muhammadu Buhari came into power in 2015, the activities of insurgents were reduced to the barest minimum.

Monguno said that the feat achieved by the Nigerian Armed Forces had led to increased economic activities within the North-East zone.

He however said, “Recently, the Boko Haram insurgents who were relegated to the background are now unleashing terror in Borno and Yobe states.

“The closure of the road is an indication that the Boko Haram insurgents have seized the road and attacked communities on that axis.”

According to him, incessant attacks on communities along the Damaturu-Maiduguri road, have forced the residents to flee to refugee camps in Maiduguri for safety.

Also, Rep. Ahmadu Jaha (APC-Borno) called for the sacking of the service chiefs, saying that they have failed to decimate Boko Haram in the North-East.

Jaha who represents Chibok/Damboa/Gwoza Federal Constituency of Borno said that contrary to the claims by the military, his constituents were still being attacked and displaced.

“I know what I am saying; I know that tomorrow, people can come for me; I am calling for immediate removal of all the service chiefs and their immediate replacement with competent ones.

“The truth of the matter is that they have overstayed and the officers under them are not stimulated (motivated) to work, perform and to end this war,” he said.

Also, Chairman of House of Representatives committee on defence Jimi Benson bemoaned how long it’s taking for the Nigerian Army, Nigeria Police and other agencies to vanquish the insurgents.

Benson invited the service chiefs to brief the committee on the progress on security.

Another lawmaker Abubakar Fulata termed the war against insecurity nationwide as a money-making venture for a powerful set.

“It seems to be a cash cow for powerful individuals considering the fact that the war has raged on for more than 7 years,” Fulata said.

He and other lawmakers called for the replacement of armed personnel in the different parts of the country.

After unanimous adoption of the motion, the Speaker, Femi Gbajabiamila mandated the Committee on Defence to ensure implementation of the resolution.