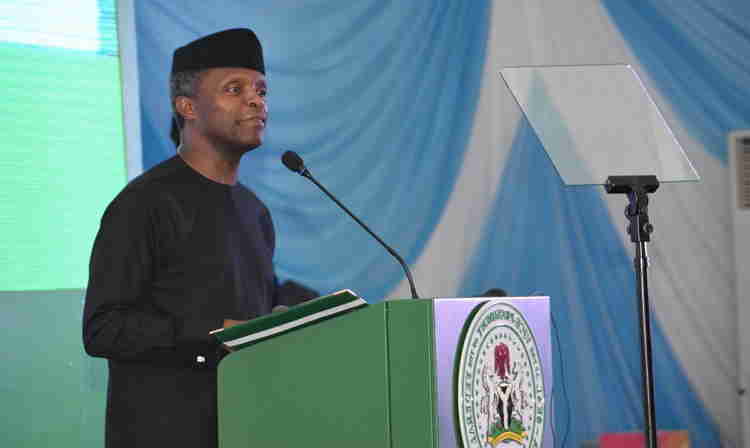 Professor Yemi Osinbajo, former Attorney-General of Lagos state and the vice-president of Nigeria has disclosed that the All Progressives Congress (APC) manifesto was drafted at the residence of Prof Pat Utomi in 2014.

This disclosure was made by the vice-president at the 5th edition of Airtel Touching lives in Lagos.

Osinbajo further added that they included a social safety initiative to specifically address poverty, among other things in the party’s manifesto.

This was contained in a statement released by the Senior Special Adviser to Vice-President on media and publicity, Laolu Akande.

“Listening to each story of a life touched this evening must remind us of the many others who need our help, our comfort and our kindness. The poor and vulnerable always need a voice.

“In 2014, Mr Wale Edun, Prof. Pat Utomi and I met at Pat’s home to write portions of the manifesto of the APC.

“We all agreed that a fundamental pillar of our party’s plans must be to create a social safety net for the people. We were convinced that government owed a duty to the poor, the weak, the vulnerable and those who cannot work.

“Social safety nets are not merely acts of sovereign kindness; they are a sovereign obligation – a responsibility.”

Speaking on the feeding programme initiated by the Buhari-led administration, Osinbajo said it has had an impact on 9.5 million children.

He also revealed that 2.2 million petty traders have also gotten loans from the Social Investment Programmes.

“Today, the social safety net scheme is the fore of our Social Investment Programmes where we are feeding about 9.5 million children in public schools in 34 states across Nigeria; we are giving monthly cash to about nearly a million households as part of our conditional cash transfer scheme; we have given, as at the last count, 2.2 million loans to petty traders whose inventories are no more than N5, 000.

READ  Christine Lagarde, managing director of the IMF, was just nominated for the top job at the European Central Bank

“We have also engaged about 500, 000 young men and women, who have been unemployed (over different periods of time) under our N-Power programme. But we are still very far from touching majority of those who need help.

“It is clear that to do so, we need far more resources behind that programme. This is why the work of social conscious companies like Airtel is so vital. Bridging the huge gap between what government can do and what is left to be done.”