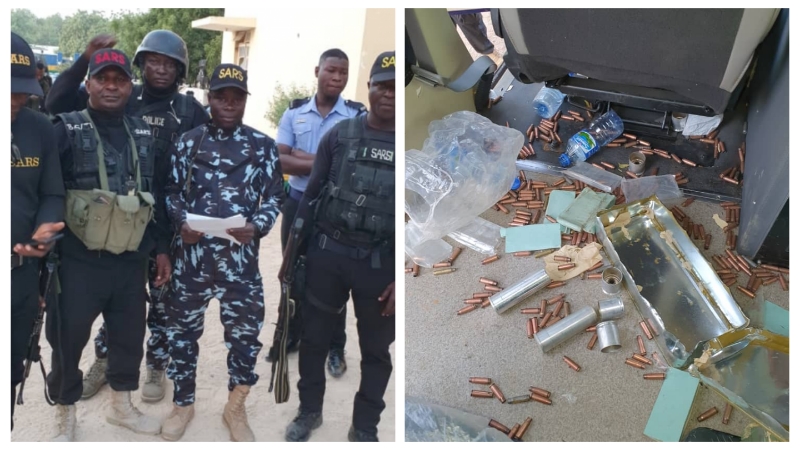 There was a mild tension in Borno community as Nigerian soldiers reportedly opened fire on a team of Special Anti-Robbery Squad (SARS) operatives who engaged Boko Haram fighters in a vicious and extremely violent battle.

The tragic incident occured in Mainok, a town located along the Maiduguri-Damaturu road in Borno state.

The resurgence of repeated Boko Haram attacks over a month have put the villages along the road which connects Borno and Yobe states in a very sorry and deplorable state.

Mainok, Borno community was invaded by Boko Insurgents in large numbers on Monday and it was learnt that villagers and some soldiers reportedly took cover while the attackers invaded the village freely. According to a resident, the insurgents were confronted by combined team of SARS and Rapid Response Squad to restore peace.

Nigerian army has been solely responsible for fight against corruption but the police get involved some times and it was earlier reported that three SARS operatives were killed by the insurgents during one of the operations carried out by the police.

According to TheCable, one of the SARS operatives who was deployed in Mainok after Boko Haram struck on Monday said7 his team spent over one hour battling the attackers.

He said after the Boko Haram fighters beat a retreat and the police teams were pulling out of the location, they came under attack from soldiers.

The operative, who craved anonymity because he was not authorised to speak on the issue, said his team members were shocked that the security operatives could attack them.

“We were deployed in Mainok after we got the information that Boko Haram was operating there. By the time we got there, Boko Haram had killed some people and destroyed their houses,” he said.

“We engaged them in a gun battle that lasted for over one hour. We overpowered them and seized two of their Hilux vehicles and weapons. Surprisingly as we were on our way out, we were attacked by some soldiers. They fired several RPGs (rocket propelled grenade) at us… one of the armoured personnel carriers (APCs) given to us by the IG was partially damaged.”

According to the source, the officer who led the operation ordered his men not to fire back at the soldiers.

He further revealed that things got under control after a reinforcement team of soldiers from Benisheikh, a neighbouring town, got to the location.

A video was obtained by TheCable depicting sides discussing about the fight against insurgents and the attack from soldiers.

In the video, Ibrahim Muhammad, commander of SARS, narrated how his men tackled the insurgents and the encounter with the aggrieved soldiers. “When we got there, we saw them (Boko Haram fighters); their identity was not even in doubt. Some were even taking cover beside the wall. We were on them, we were charging in, charging out,” Muhammad said in the video.

“Later, we noticed that they had escaped, the RRS briefed me that while they sighted them (the insurgents) moving in convoy on high speed at the southern part. We were then charging in finally, that was when I noticed that the people on my right hand side were soldiers… As we were coming, they were firing us and I said is it this people again?”

Abdul Kahlifa, general officer commanding 7 division of the army, interrupted him saying: “We will investigate it.”

A soldier, who spoke off the record told TheCable that it was aggression that led his colleagues to open fire on the police team.

“Boko Haram terrorists dislodged troops in that area and abducted about 10 soldiers. When the other soldiers who were not on ground at the time of the attack came back, they had an order to just open fire. So, they started shooting with that aggression.”

TheCable understands that Mohammed Aliyu, commissioner of police in Borno, and Olusegun Adeniyi, theatre commander, Operation Lafiya Dole, have met over the issue. It is unclear the resolutions reached at the meeting.

Elder Okon, spokesman of the Borno police command, neither answered calls nor responded to text message TheCable sent seeking his comments on the incident.

But Musa Sagir, spokesman of the army, who responded briefly, told TheCable that he was not aware of the development.

“I’m not aware but I will find out,” he said over the phone.

The attack on the policemen happened on a day some Borno residents said soldiers abandoned them at the mercy of Boko Haram after Babagana Zulum, governor of the state, levelled allegations of extortion against them. Bullets inside the abandoned vehicle