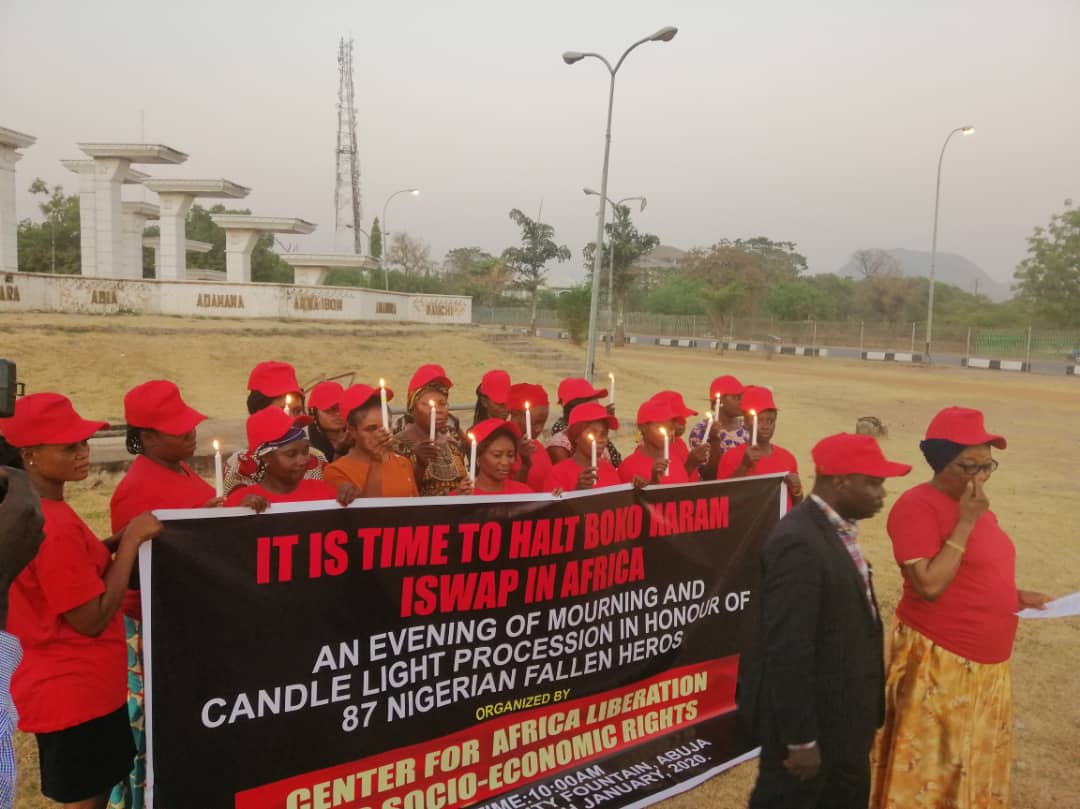 In a press conference on Wednesday in Abuja, CALSER President, Princess Ajibola believes the killing of the Christian cleric shows the radical sect’s desperation to provoke sectarian strife that could ultimately birth crisis.

According to the Centre, Boko Haram/ISWAP ideology has nothing to do with religion but rather sheer wickedness and evil against humanity.

CALSER, therefore, called on Nigerians to unite irrespective of religious and ethnic divide to put an end to the terrorist’s devilish ideology.

While tasking the Federal Government, through the various security agencies, to identify the perpetrators, CALSER further urged the international community to quit the silence and condemn the activities of the terrorist group.

The Centre for Africa Liberation and Socio-Economic Rights (CALSER) condemns in the strongest terms the murder of Lawan Andimi, chairman of the Christian Association of Nigeria (CAN) in Michika local government area of Adamawa state by terrorists. We mourn the death of Pastor Andimi not just because of the tragic connections but because of the danger his murder poses to long term stability of Nigeria.

The murder of the Christian clergy further confirms our fears that Boko Haram and Islamic State West Africa Province (ISWAP) are desperate to provoke sectarian strife that could see Nigerians attacking and counter-attacking each other if they fall for the terrorists’ strategy of deepening religious divides.

CALSER therefore reminds Nigerians that Boko Haram/ISWAP ideology has nothing to do with religion but rather sheer wickedness and evil against humanity. Rather than being people that want to forcefully impose their religion on the rest of us, these terrorists are nothing but a bunch of criminals, psychopaths and sociopaths who hide their perversion behind religious claims.

The killing of Pastor Andimi calls for sober reflection but even more is the need to have the appropriate responses from the various stakeholders. At the top of the hierarchy is the urgent need for unity of purpose by all men of goodwill, who must to come together irrespective of religious or ethnic affiliation to defeat the evil called Boko Haram/ISWAP.

The clergy across all persuasions must condemn the dastardly murder while urging their followers to resist the temptation of taking steps that could create new problems for the country. Islamic clerics have the particularly arduous task of addressing conditions that make it possible for the terrorists to pervert religious teachings for brainwashing, recruiting, radicalizing and manipulating their members into disregarding the sanctity of human life.

We call on the Federal Government, through the various security agencies, to particularly identify the terrorists involved in the pastor’s murder and promptly take justice to them to serve as a deterrence and a reminder that such reckless act of terrorism is not permissible irrespective of what international support Boko Haram and ISWAP enjoy. Nigerians and their military must not give up on reducing Boko Haram/ISWAP to ashes anywhere in the country and beyond.

Whilst the international community continues to maintain the very shameful silence over the atrocities committed by Boko Haram/ISWAP in Nigeria’s north east, and while a section of the international media circuit continues to promote falsehood against the Nigerian military despite their sacrifices for the security of all citizens, we believe that the murder of Pastor Andimi should be a watershed and an opportunity for them to recalibrate and renounce all forms of support for the terrorists, implied, covert or overt.

The world and its police body should not stop at just condemning the murder but must move further by taking practical steps that help countries affected by Boko Haram/ISWAP terrorism to bring the criminals and their sponsors to book.