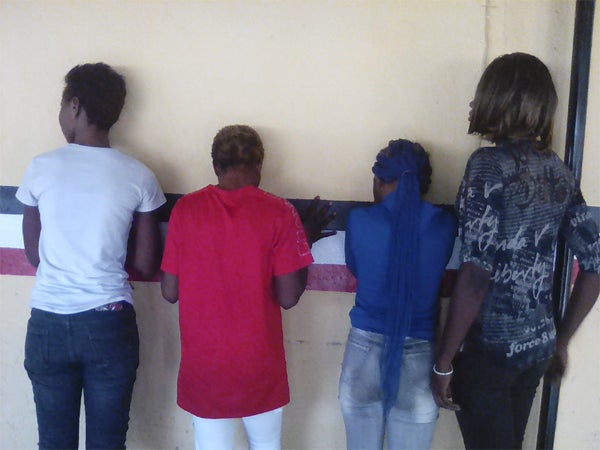 A 30 year-old suspected human trafficker Michael Omowunmi, has revealed that she usually make the sum of N30,000 CFA (an equivalent of N18,600) per victim, anytime she traffic’s Nigerian ladies for prostitution to African countries most especially Mali.

However, nemesis caught up with her on Wednesday as she was apprehended by the officials of Nigeria Security and Civil Defense Corps NSCDC, Lagos State Command and was paraded on Thursday.

The resident of No 13, Abule-Oki, Iyana-Ipaja, Lagos, was apprehended alongside four of her victims.

The former food vendour ssays she ventured into the illicit business over two years ago and use the proceeds for the upkeep of her seven years old son unknown to her that the business will boomerang.

Recounting her experience, she said a woman lured her into the illicit business in the year 2017.

She claimed the woman approached her where she was assisting a food vendour as a service girl and promised her a better life provided she could serve as a house help in Mali.

Omowunmi said she jumped at the offer unfortunately for her, the arrangement turned out to be prostitution and she could not make a U-turn having committed herself into it.

Having settled her travel agent to the tune of N600,000, she reached another agreement with her boss to introduce more victims and this gave her the opportunity to earn a commission of 30,000 CFA (N18, 600) per victim and in year 2019, she returned to Nigeria to supply more victims for the illicit business and had already opened talks with four of them when luck ran against her.

One of the victims 23 years old Amaka Eze a native of Anambra State, said she completed apprenticeship in hair dressing about three months ago and was trying to source money for her graduation when she met Omowunmi at her Abule-Oki residence last Tuesday.

This resident of Odogunyan-Ikorodu in Lagos State said, ‘’on getting there, she promised to get me a lucrative job but did not disclose the venue. Since I was desperate to get a job, I obliged and she told me to wait till the following day so that other ladies could join in the process of planning the trip.

True to her words, the ladies visited her unfortunately, the negotiations did not favour them and we all left in annoyance. On getting to the bus-stop, some Policemen who psychologically read our countenance suspected us and we were accosted to her place and that was how it dawn on me that she was a human trafficker,’’

Two other victims Alaoye Joy and Victoria Oshioke both 22 and 19 years old confessed they were once neighbours to Omowunmi in Mali.

Both returned to Nigeria recently and were planning a return trip when they met Omowunmi.

The Lagos State Commander NSCDC, Otoibihi Ehi Cyprian said the suspects will be handed over to appropriate authorities for prosecution.