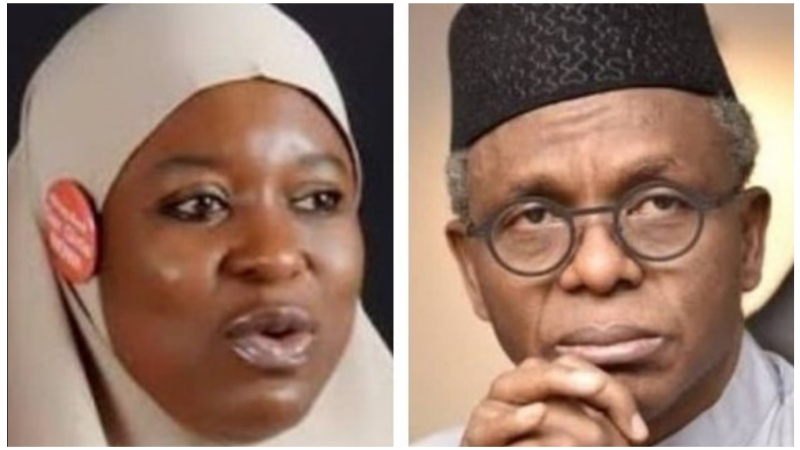 Aisha Yesufu, the co-convener of the Bring Back Our Girls Movement BBOG and the woman Mallam Nasir El-Rufai, the Governor of Kaduna state once described as an Iron lady has dragged and intellectually teared apart the Kaduna State Governor on the social media space over his silence on Buhari’s daughter, Hanan using presidential jet for a private function.

Hanan Buhari, a certified creative photographer and youngest daughter of President Muhammadu Buhari has incurred the wrath of some Nigerians after she was flown on the presidential jet to attend and take photographs of the traditional durbar ceremony organized in her honour by the Emir of Bauchi, Rilwanu Adamu at his palace in Bauchi State.

Aisha Yesufu and Nasir El-Rufai once shared a wonderful past in activism before El-Rufai joined the murky wsters of politics. There were speculations that both had issues but the big issue started after Aisha Yesufu had taken to Twitter to call out the governor following his silence on Hana Buhari, daughter of President Buhari using the presidential jet for a private function.

This action of the daughter of President Buhari has sparked anger and several Nigerians including members of the PDP have reacted angrily and they felt it was unconstitutional.

Reacting to the development, the Presidency said members of the first family are entitled to using the presidntial jet.

The co-convener of Bring Back Our Girls Movement BBOG who could not hide her displeasure over the unsual silence of Kaduna State Governor pulled up old tweets of Mallam Nasir El-Rufai where he attacked Goodluck Jonathan administration when it planned to purchase another presidential jet.

Reacting to Innocent’s tweet, Governor Nasir El-Rufai disclosed that he is not interested in responding to ”publicity/follower-seeking, anonymous and jobless clowns with neither credentials nor address”.

The Kaduna State Governor seems not to be satisfied with his response to Innocent’s tweet and further added that;

It was a battle in a new dimension as Aisha Yesufu fiercely attacked the Governor after sighting his response which was directed to her.

Yesufu recalled old tweets credited to Govenor Nasir El-Rufai where he attacked former President Goodluck Jonathan and Aisha Yesufu promised to deal with the Governor on Twitter street, saying she can never be intimidated by Governor Nasir El-Rufai.

😆😆😆😆🤣🤣🤣🤣🤣🤣
Nasir El Rufai @elrufai that should be seeking forgiveness is forgiving people😳😳
This low life, back stabbing, lies peddler, rumour monger who ranted and raved when he was not in government and knelt his way to being a Governor has mouth to talk.😆😆😆😆🙆‍♀️ https://t.co/gIygIl8slX pic.twitter.com/1bzdPKEvMb