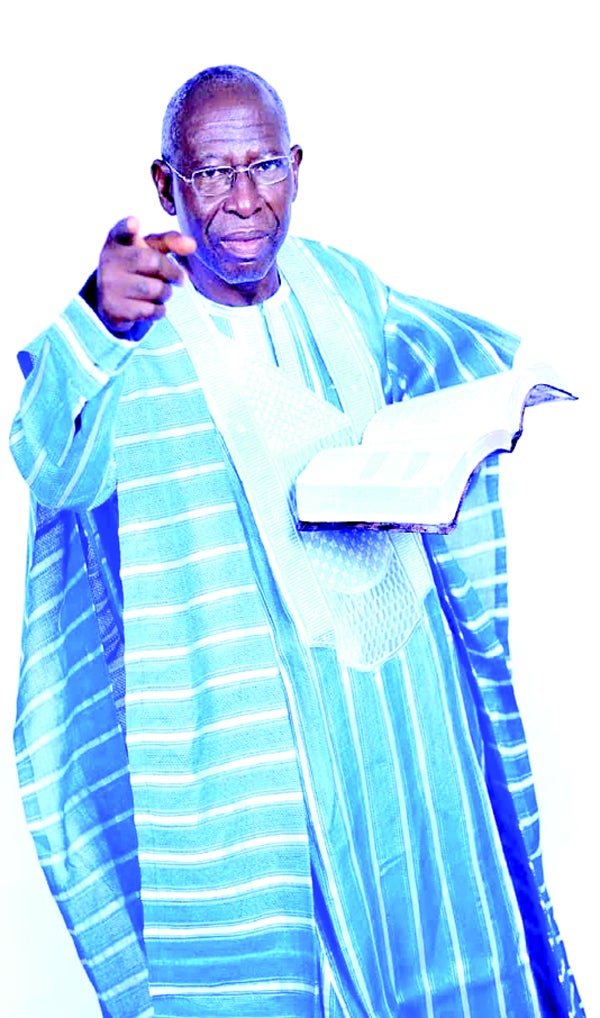 His humanitarian activities, without financial support from anywhere, to say the least, are legendary. Other segments of the Commission include the Word Assembly, the Word Commission International Charities and schools.

Omolehin also caters for old people and operates a rehabilitation centre for mentally challenged people. His ministry is pure rural evangelism with deliberate attention on charity and, practically, the meeting of the needs of the underprivileged the best way he could. The cleric, in his 60s and who studied animal science at University of Ilorin, started his ministry over 40 years ago in Ilorin where he had lived all his life though he is from neighboring Kogi State.

Speaking in an interview in his office, Omolehin gave graphic details of lives God had used him and his ministry to change for the best, backing his claims with pictures, and many publications over the years. He recalled communities in Kwara that needed water and he dug bore holes for them, adding that the ministry had been taking care of aged people abandoned by relations, and babies abandoned on the streets, while some were brought by prostitutes.

‘’In a number of communities, demons causing deaths left because I sank boreholes there. A mad woman walking the streets of Ilorin naked was picked and rehabilitated in our rehabilitation center. “She had trekked to Ilorin from Ibadan, mad. Now she is well and is a mother of three who now runs a mini supermarket in Ibadan”, the cleric said. “A number of elderly people have been abandoned by their sons and daughters as a result of family disputes.

Some have been accused by their children of witchcraft and other conditions for which they are abandoned. ‘’We have a team of women that visits them in their homes, wash their clothes, make their hair, cook their meals and also keep their companies to reduce loneliness.

‘’The situation we found in different homes impressed it on us to build a place where we can bring them into, so that they can have access to regular light and water as well as medical care in our hospital”. The cleric recalled how a prostitute came to drop her baby with the ministry because she was disturbing her business.

“A prostitute who came to drop her five years old daughter with us in the orphanage said she did not want the girl to be spoilt, that the single room where she was doing her business was also the place where she lived with the girl and the girl was beginning to see things she will not like her to know about”, he stressed.

“If a customer came and she asked the girl to go and play, she would soon return to knock saying ‘I have played finish’. So, we took the girl as we also continually taught the mother about human dignity. She has since changed to live a more fulfilled life taking to alternative business of selling recharge cards’’. Omolehin also said that the assembly also takes care of the widows, beggars and the needy. He said, “Many widow need care. We cook for the poor and beggars every Saturday.

Omolehin said he had gone for crusade in Obbo-Ayegunle in Ekiti local government area of the state, by the lead of the Holy Spirit when young people were dying and fasted for 20 days and the strange deaths stopped. Having observed many jobless youths when he went for the crusade at Obbo-Aiyegunle, he asked for land from the monarch and now has a big fish farm where those youths are gainfully employed. But the evangelist was particularly dejected that the more he takes people off the streets, the more the prevailing bad leadership breeds them, and it looks as if he hasn’t done anything.

He said, “The truth is that I am not happy because all these men of God too drive on the streets, they don’t close their eyes, they see these things I am talking about, but they don’t care. “If they had done the same thing like I have been doing over the years, the crisis we are having today won’t be as much as this’’. He was however happy and fulfilled that four of his children are pastors overseas, and they are doing fine. He showed pictures of how he, his wife and aides took the naked mad woman in ARMTI area of Ilorin who trekked for four years from Ibadan to Ilorin and rehabilitated her.

READ  Nigerian Actress, Adelewa Reveals The Kind Of Actresses Who Sleep With Producers For Roles

‘’After she was okay, she took us back to her house in Ibadan, directing us as we went and, when we arrived there, the relations told us she just went out to buy something and she never came back. Today, she has her own mini supermarket she is running”, Omolehin said. He recalled with nostalgia, too, how the Commission picked abandoned babies from the streets while some were brought to the motherless home, numbering 63, “and we fed them everyday”.

The eclectic Omolehin was optimistic that the whirlwind preaching for prosperity by many of the churches in Nigeria has compounded the problems in the society. He called prosperity preachers fraudsters and self-centred people because the money they keep asking people to bring shows that they are also needy, and he was also particularly sad that the wealth is not beneficial to members of their congregation.

“How would you describe the big churches whose leaders have private jets and universities but which members’ children cannot attend because the varsities are expensive and, therefore, not meant for them, whereas the money was generated from members of the church in the first place?, he asked Omolehin harped on saving souls through evangelism, which, he said, is the essence of Christianity, instead of preaching prosperity. He noted that the clear departure from evangelism as was in the days of old is the genesis of the crisis in our society today.

“In the Bible, the rich man couldn’t abandon his wealth and follow Jesus when Jesus asked him to do so because he preferred to have his wealth and go to hell. If you ask me, those who are preaching prosperity and misleading our youths into all manners of short cuts to sudden wealth won’t make heaven’’, the cleric said. He was emphatic that his calling through evangelism and teaching the word of God was to take off the streets those who are on the wrong side of life because of their addiction to drinking, smoking, adultery and all manners of social vices.

He said, “And we do this with skills. We let them see plan B, that their lives could be a lot better if they abandon this other life. The skills we are talking about is not about telling them that smokers would die young, and all that because they already know that over the years and still people stick to smoking, so it is not the option. “The skills we have been applying have been compelling them to see the gruesome side, and the consequence of their addiction, and it would be gradual until they totally abandon it’’.

The Gaa Imam community in Ilorin around where his church is located used to be a dreaded area to pass when it was getting dark because of its notoriety for large numbers of youths who were addicted Indian hemp smokers. But peace now reigns in the community because Omolehin’s Commission has been able to take away those youths off the streets and they are now members of his church. The community head of Gaa Imam though a Muslim was so elated about this development that he led a delegation to thank him and his ministry.