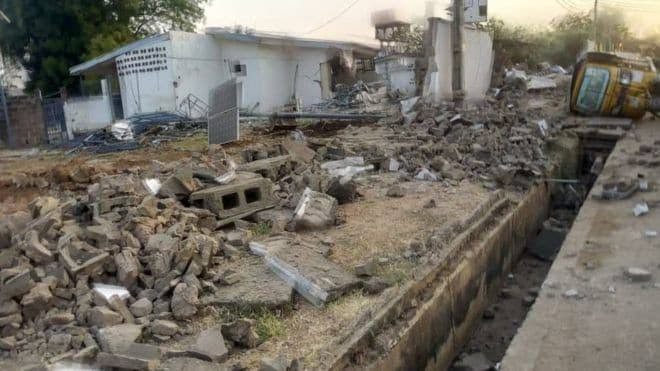 Days after the demolition of late Olusola Saraki’ property in Ilorin which has generated controversy and several reactions, the Kwara State Police Command has denied its involvement.

This was disclosed in a press statement by the Police Public Relations in the state, DSP Okansani Ajayi, the Kwara State Police Command dispelled reports of policemen shooting life ammunitions and firing teargas canisters at the scene of the demolition exercise.

The Commissioner of Police in the state, Kayode Egbetokun ordered a full scale investigation into the demolition exercise to determine the veracity of the claims, Ajayi further disclosed.

The statement read in parts;

“Our anti-crime deployment during this period has nothing to do with any demolition exercise in the state.

“It is therefore shocking to the commissioner of police to hear the news of policemen shooting life ammunitions and firing teargas canisters at the scene of a demolition exercise.

“For the purpose of emphasis, the command wishes to immediately dispel the insinuations that the men reported having been firing indiscriminately during the demolition exercise were deployed by the Kwara state police command.

“No policeman was deployed by the command for any demolition exercise anywhere in the state and no policeman deployed for anticrime duties during the Christmas and new year celebrations fired a single shot of ammunition or canister during this period.

“The command hereby for the umpteen time wishes to reiterate the irrevocable commitment of the commissioner of police to principles of fairness, justice and the rule of law while making police service available and accessible to the people of Kwara state.”