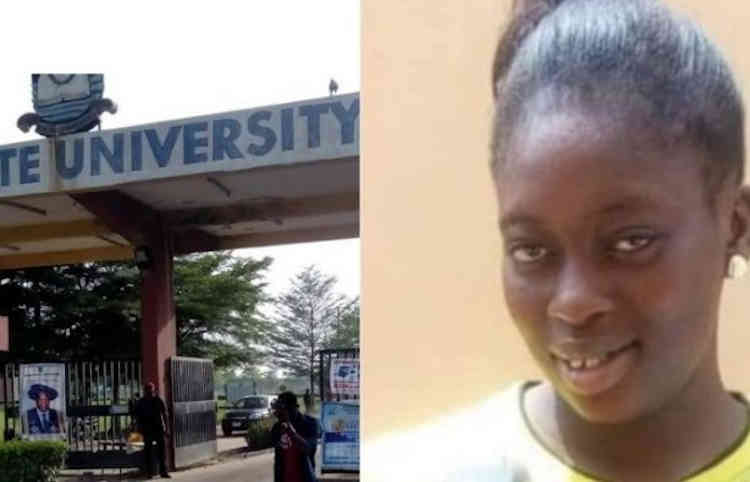 THE police in Osun State on Saturday exhumed the corpse of Favour Daley – Oladele, the Lagos State University student, who was allegedly killed for money rituals at a church in Ikoyi-Ile in the state, last month. The pastor of the church, Segun Philips, a woman- Bola Adeeko, and her son, Owolabi, are being interrogated by the police in connection with the killing. Mother and son were, until their arrest, sharing a ‘face me, face you, apartment at Konifewo, Ijako in Ado0Odo/Otta Local Government area of Ogun State.

Osun State Police Commissioner Babatunde Kokumo, personaly led the operation. He said the exhumation was to assist the police in their investigation of the matter. A crowd soon gathered around the scene to witness what was going on. They rained curses on the suspects for the killing. Kokumo told reporters that the police would investigate other churches in the area. He said: “We have brought our homicide experts to exhume and help in the furtherance of the investigations started by the Ogun State Police Command with a view to prosecuting the suspects.

“It is a gruesome murder and the whole thing is quite horrible. We will not fold our arms and watch lawless citizens take laws into their hands, destroying people’s lives. We have been informed that we have a number of churches in this community. It is our responsibility to conduct our investigation. What we are doing is intelligence policing driven by the people’s needs.

“If the communities are making us know that they are no longer comfortable with the number of churches or the caliber of such people running the churches, then it becomes our responsibility to conduct an investigation on their activities and check them.

“My advice is that parents have a lot of roles to play. We have a lot of children in schools; the parents owe them the responsibility to make to know that apart from their academic pursuit they must see to their moral training. It is only when the two are well combined that you can have a complete human being.”

Probed by reporters,Philips said Favour was the first person he killed and that his action was to experiment what he read in the ‘Seven Books of Moses.’

Mother, son live in rented ‘face me – I face you’ apartment

Bola Adeeko and his son, Owolabi were living in a ‘face – me – -face -you’ rented apartment at Konifewo, Ijako area of Ota, Ogun State,The Nation gathered on Saturday.

The one and a half kilometers un-tarred road meandering into Konifewo from Ijako junction of the Abeokuta – Lagos expressway, is a story of decades of neglect of the residents by successive governments.

Curiously, erected at one of the junctions leading to Konifewo is an image of a lion at the base of which is the inscription – Orita Money Citizens Base (Money junction).

The Nation met with people who ought to have heard about the suspects since the news broke out but there was little help from the villagers, even after showing their pictures. Some of them said they only heard about it on radio and expressed doubts that they were neighbours.

However, a resident admitted knowing the woman’s residence on Unique Street and helped procure a commercial motorcycle operator to take the reporter there.

The residents Unique Street area of Konifewo were palpably suspicious of strangers as soon as the bike man the house pulled up at a point which is a building away from the residence. Perhaps out of fear of strangers or arrest on suspicion of being a security agent, none was willing to talk or admit knowledge of the woman and son.

The Nation had a herculean task locating the grey – coated building tucked on a side of Unique street, Konifewo, where Bola and son, Owolabi, were said to live. It is unlikely that the duo would return to the area believed to be a relatively new settlement by people of mixed ethnic and tribal backgrounds. It is also unlikely that her husband lives with them in that apartment.

Our correspondent met a young man washing clothes in the compound.

He denied knowing Bola and his son or their address, claiming he was new in the neighbourhood. Also, a woman who just finished observing her afternoon Islamic prayer, quickly avoided the reporter and dashed to her apartment within the building.

Little is known about Bola and son in the neighborhood. A woman who said she was not on talking term with her, told The Nation that she didn’t know what Ms Bola does for a living.

Owolabi is alleged to have lured Favour to the Ikoyi – Ile church where she was killed for money rituals.

The three suspects who were arrested by detectives from the Mowe Division of the Ogun State Police Command, have been transferred to Osun State for prosecution, the Police told The Nation yesterday.

The Police Public Relations Officer for the state Command, Abimbola Oyeyemi, said that the detectives handling the case had sent the case file and suspects to Osun state Command the scene of the crime.