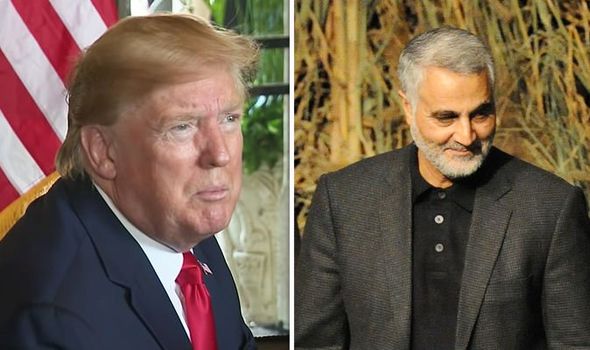 United States President, Donald Trump, has revealed that Iranian military commander Qasem Soleimani was killed to stop a war, not start one.

Naija News reports that Soleimani, the head of the Iranian Revolutionary Guards’ elite Quds Force, was killed by the United States forces.

Speaking to newsmen in Florida, Trump accused Soleimani of “plotting imminent and sinister attacks on American diplomats and military personnel, but we caught him in the act and terminated him”.

“For years, the Islamic Revolutionary Guard Corps and its ruthless Quds Force, under Soleimani’s leadership, has targeted, injured, and murdered hundreds of American civilians and servicemen.

“The recent attacks on U.S. targets in Iraq, including rocket strikes that killed an American and injured four American servicemen very badly, as well as a violent assault on our embassy in Baghdad, were carried out at the direction of Soleimani.

“Soleimani made the death of innocent people his sick passion, contributing to terrorist plots as far away as New Delhi and London.

“The late military general had been carrying out acts of terror to destabilise the Middle East for the last 20 years.

“Just recently, Soleimani led the brutal repression of protestors in Iran, where more than a thousand innocent civilians were tortured and killed by their own government.

“We took action last night to stop a war. We did not take action to start a war.

“I have deep respect for the Iranian people. They are a remarkable people, with an incredible heritage and unlimited potential,” he said.

Trump noted that although the U.S. was not seeking a regime change in Iran, the “Iranian regime’s aggression in the region, including the use of proxy fighters to destabilise its neighbours, must end, and it must end now”.