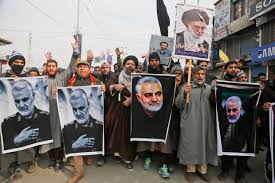 World leaders, including Germany and France have reacted to the killing of Iranian top military leader, Maj. Gen. Qassem Soleimani by the US government.

Recall that Maj.-Gen. Soleimani, Commander of the Quds Force of Iran’s Islamic Revolution Guards Corps, was murdered in a US airstrike on his convoy at Baghdad airport yesterday

“We are at a dangerous point of escalation. It is now important through prudence and restraint to contribute to de-escalation,” Demmer said, as quoted by Al Jazeera.

“We are making use of our diplomatic channels to Iran and to other states in the region,” he said.

“Since this morning we have been in close contact with our British and French partners and with other European countries on how we can best work to calm the situation.”

France stated also that its priority is to stabilise the Middle East.

“What is happening is what we feared: Tensions between the United States and Iran are increasing,” Montchalin said. “The priority is to stabilise the region.”

“We have woken up to a more dangerous world,” Montchalin added, saying French President Emmanuel Macron would consult soon with “players in the region.”