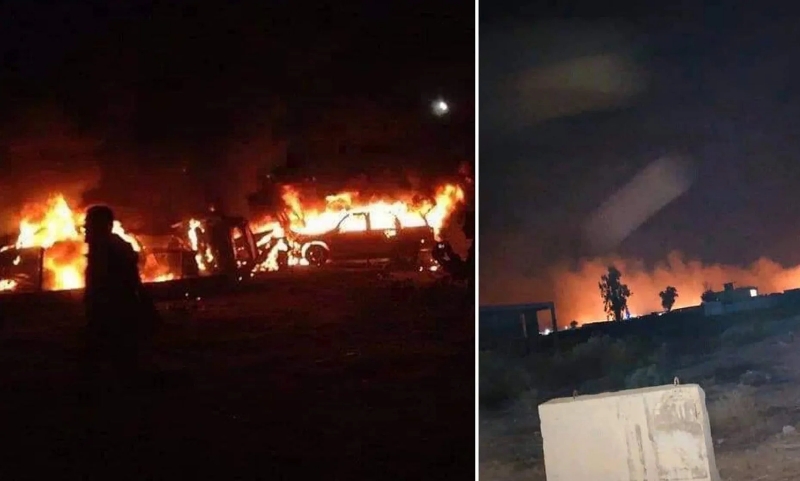 Following the reports of a new air strike targeted at s convoy of pro-Iran militiamen late on Friday on Taji road North of Baghdad, a U.S military spokesman has denied that America is responsible for the new attack.

In a statement released by Colonel Myles B. Caggins III, the spokesman for Operation Inherent Resolve, the coalition fighting ISIS in Iraq and Syria, it stated that the Coalition did NOT conduct airstrikes near Camp Taji (north of Baghdad) in recent days.

It followed initial reports pinning responsibility for the strike on the U.S., and contradictory accounts from Pentagon sources. It remains unclear whether the convoy was attacked by ground-based rockets after all, or another military with air capabilities in the area.

The pro-Iran Popular Mobilization Forces claimed that the convoy was composed of medical vans, and only medics were killed.

The Pentagon referred an inquiry from DailyMail.com to US Central Command, which did not immediately respond to a message seeking comment.

The targeted strike against Soleimani and any retaliation by Iran, could ignite a conflict that engulfs the whole region, endangering U.S. troops in Iraq, Syria and beyond.

Senator James Rich, Republican chairman of the Senate Foreign Relations Committee, said on Fox News that he had been briefed on the latest strike north of Baghdad.

Rich said that the strike occurred at about 1.15am Saturday Baghdad time. He declined to comment further until information about the strike is declassified by the Pentagon.

The latest strike comes amid rapidly escalating tensions between the U.S. and Iran and fears of an all-out war.

Over the last two decades, Soleimani had assembled a network of heavily armed allies stretching all the way to southern Lebanon, on Israel’s doorstep.

The U.S. said it was sending nearly 3,000 more Army troops to the Middle East, reflecting concern about potential Iranian retaliation for the killing of Soleimani.

Iran’s U.N. ambassador Majid Takht Ravanchi said in an interview with CNN on Friday that the strike killing Soleimani was tantamount to declaring war.

He said that by ‘assassinating’ Soleimani, the United States had entered a new stage after starting an ‘economic war’ by imposing tough sanctions on Iran in 2018.

‘So that was… a new chapter which is tantamount to opening a war against Iran,’ Ravanchi said.

President Donald Trump, who personally gave the order for the drone strike that killed Soleimani, charged him with plotting attacks on Americans and said the action was taken to prevent war.

‘We took action last night to stop a war. We did not take action to start a war,’ the president said in brief remarks at Mar-a-Lago on Friday.

‘We do not seek regime change. However, the Iranian regime’s aggression in the region including use of proxy fighters to destabilize its neighbors must end and must end now. The future belongs to the people of Iran,’ Trump said.