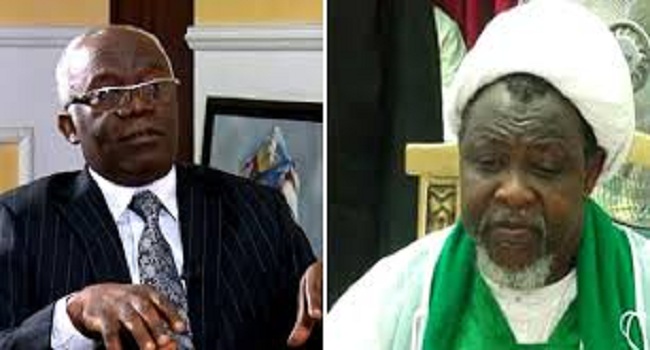 Lawyer, Femi Falana (SAN) has again requested the Attorney-General of the Federation and Minister of Justice, Abubakar Malami (SAN) to release Sheikh Ibraheem El-zakzaky and wife, Hajia Zeinat El-zakzaky in compliance with the valid and subsisting orders of the federal high court and the Kaduna State High Court concerning our clients.

Falana, in an open letter to Malami, said the request was in line with the new policy of President Muhammadu Buhari’s administration to operate under the rule of law.

The open letter was titled, “Request for compliance with court orders in favour of Sheikh Ibraheem El-zakzaky and Hajia Zeinat El-zakzaky”.

“In view of the recent decision of the federal government to comply with all court orders, we have the instructions of our clients to request you to ensure compliance with the valid and subsisting orders of the federal high court and Kaduna state high court concerning them”.

He urged the Minister of Justice to review his position on the matter and ensure the immediate and unconditional release of El-zakzaky and wife Zeinat.

Falana chronicled several efforts of the government to justify the detention of Sowore and El-zakzaky.

He remarked that after the release of Mr. Omoyele Sowore and Col. Sambo Dasuki (retd) from illegal custody last week, the minister reportedly said “our clients could only be released by the Kaduna State government”.

He however note that the position of the Attorney General of the federation failed to take cognisance of the fact that his office, the Presidency and the state security service had, up till last month, repeatedly given contradictory reasons to justify the disobedience of the aforesaid court orders for the release of our clients.

The learned silk also noted that in an attempt to justify the decision of the federal government to detain Messrs Sowore and Bakare in defiance of the orders of the federal high court, the State Security Service issued a statement on November 14, 2019 in which it claimed that the duo, as well as El-zakzaky and Dasuki, were enjoying themselves in custody as “they are allowed access to people and use of other facilities like telephones, gymnasium, TV, newspapers and medical facilities”.

Falana recalled: “On December 2, 2016, the federal high court presided over by the Honourable Justice G. O. Kolawole (now of the Court of Appeal) declared illegal and unconstitutional the arrest and detention of Sheikh Ibraheem El-zakzaky and his wife, Hajia Zeinat El-zakzaky by armed soldiers.

“Consequently, the Court awarded them N50 million damages for their illegal detention, ordered the state security service to release them from custody forthwith and provide them with a house since the Nigerian Army had burnt down and demolished their house in Zaria, Kaduna State.

“No motion was filed for stay of execution of any of the orders of the federal high court. However, the motion of the federal government for extension of time to file the appellant’s brief out of time was not taken on the grounds that could seek any relief from an appellate court.

“On January 19, 2017, the federal government claimed that Mrs Zeinat El-zakzaky was not in detention but decided to keep her husband’s company.

“On January 20, 2017, sources close to the Presidency were alleged to have said that our clients could not be released on grounds of national security.

“On June 16, 2017, the Minister of Information, Alhaji Lai Mohammed, explained that the reason why our clients had not been released was that the house being built for them by the federal government had not been completed.

“In a desperate bid to stop the Shiites from further embarrassing the federal government by demanding compliance with the court orders for the release of their leader the federal government caused the Kaduna State government to charge our clients with incitement of members of the Shia movement to commit culpable homicide, blocking of roads and leading an unregistered organisation to wit: Islamic Movement in Nigeria.

“As you are no doubt aware, the over 300 Shiites alleged to have been procured by our clients to commit the said criminal offences have been discharged by the Magistrate Court and High Court of Kaduna State for want of evidence.

“However, by an order made on August 5, 2019, the Kaduna State high court granted our clients leave to travel to India for urgent medical treatment subject to the supervision of the Respondent i.e the Kaduna State government.

“But instead of allowing the hospital to treat our client under the supervision of the Kaduna State government the federal government took over the medical treatment, imposed doctors on our clients and denied them access to their personal physician who had accompanied them from Nigeria. Thus, our clients were deliberately denied access to medical treatment in defiance of the order of the Kaduna State high court”.

He said notwithstanding the pending criminal case in the Kaduna State high court, the office of the Attorney General and the Presidency have not ceased to justify the refusal of the federal government to comply with the orders of the federal high court and the Kaduna State high court. Falana made a list of statements made by the Attorney General and other officials to justify why government continued to hold El-zakzaky and wife in spite various court orders.

“On July 23, 2019, the Special Adviser to the President on Media and Publicity, Mr. Femi Adesina, said that the President Muhammadu Buhari-led government refused to obey Justice Gabriel Kolawole’s order on the release of the leader of the Islamic Movement of Nigeria, Sheikh Ibraheem el-Zakzakky, because it had appealed the ruling. Mr. Adesina made the statement during an interview on Channels Television’s Sunrise Daily

“On July 26, 2019, during your screening for reappointment as the Attorney-General of the Federation, you told the Senate that the disobedience of court orders by the Buhari administration in respect of El-zakzaky and others was based on national security.

“When the street protests by the Shiites to demand for the release of their leader did not stop the federal government announced the proscription of the Islamic Movement in Nigeria on July 27, 2019” adding that the proscription was sequel to an ex parte order secured from the federal high court by the office of the Attorney-General of the Federation.