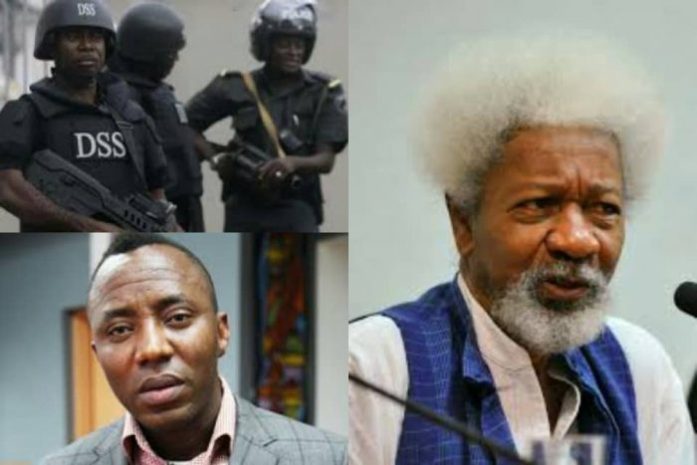 The Nobel Laureate, Wole Soyinka has described the continued detention of Omoyele Sowore by security agents of the Federal Government, Directorate of State Security, DSS, inspite of release order by the court as an embarrassment to the world and called on civil society organisations to strategize to restrict the threat.

Soyinka who condemned the act in its entirety, made the remark in a statement released early Wednesday, through his WS Foundation for the Humanities.

He stated, “It should become abundantly clear by now that Civil Society organisations, committed to the entrenchment of the Rule of Law and the defence of fundamental human rights must come together.

This is not a new cry. They must meet, debate, and embark on a binding pact of tactical responses whenever these two pillars of civilized society are besieged by the demolition engines of state security agencies.

“The sporadic, uncoordinated responses as in the case of Omoyele Sowore, the absence of a solid strategy, ready to be activated against any threat — these continue to enable these agencies in their mission to enthrone a pattern of conduct that openly scoffs at the role of the judiciary in national life. Result? A steady entrenchment of the cult of impunity in the dealings of state with the citizenry – both individuals and organizations.

The level of arrogance has crossed even the most permissive thresholds.

“It is heart-warming to witness the determined efforts of “Concerned Nigerians” in defence of these rights.

Predictably, the ham-fisted response of the Directorate of State Security (DSS) continues to defy the rulings of the court. The weaponry of lies having been exploded in their faces, they resort to what else? Violence! Violence,including, as now reported, the firing of live bullets. Why the desperation? The answer is straightforward: the government never imagined that the bail conditions for Sowore would ever be met.

“Even Sowore’s supporters despaired. The bail test was clearly set to fail! It took a while for the projection to be reversed, and it left the DSS floundering.

That agency then resorted to childish, cynical lies. It claimed that the ordered release was no longer in their hands, but in Sowore’s end of the transfer. The lie being exploded, what next? Bullets of course.

Such a development is not only callous and inhuman, it is criminal. It escalates an already untenable defiance by the state. As I remarked from the onset, this is an act of government insecurity and paranoia that merely defeats its real purpose. And now – bullets?

“This is no longer comical. Perhaps it is necessary to remind this government of precedents in other lands where, even years after the event, those who trampled on established human rights that generate homicidal impunity are called to account for abuse of power and crimes against humanity.

“The protests for Sowore’s release go beyond only acts of solidarity, they are manifestations of the judgment and authority of courts of law, under which this nation is supposedly governed. Either it is, or it isn’t. The answer stares us all in the face.

The principles that now fall under threat implicate more than one individual under travail. They involve the very entitlement of a nation to lay claim to membership of any democratic, humanized union.