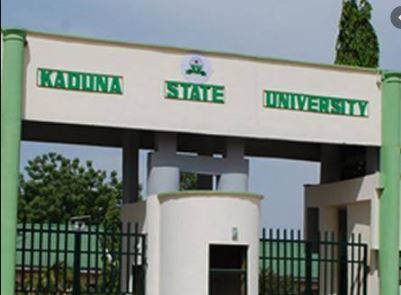 Salamatu Bello, a victim of alleged s*xual harassment by a university lecturer, on Friday, staged protest round Kaduna metropolis to highlight the plight of female students in the country.

News Agency of Nigeria (NAN) reports that the victim, holding a placard with the inscription, ‘It’s your right NOT to be sexually abused as a student’, later spoke with newsmen on the matter.

Bello was sexually abused while she was a student of Ahmadu Bello University (ABU) Zaria in 2010, and the lecturer alleged to have molested her is now with Kaduna State University (KASU).

Although she declined detailed comment on what transpired, Bello said she will appear before the committee set up by Kaduna State University to investigate the lecturer, Mr Bala Umar, popularly known as AB Umar.

According to her, sexual harassment of female students has been going on in tertiary institutions for long, as the victims were always unwilling to speak out.

“We have this going on in our academic institutions for long and we have been covering people, which is the ‘Arewa silent culture’ that we have been practicing.

“If you look at it, what we normalize today, our children are going to pay for it later.

“This is something that had happened a long time, people think I am vindictive which I am not, because ABU to KASU is just 70 kilometers.

“If you are doing same there and you left there and come here and continue doing it, somebody has to stop you.

“We always have this notion in our society that if you come out and say it, nobody will marry you, the stigma is not bearable.

“AB Umar was my former lecturer in ABU, that is when and where it happened and there are some things that I can’t just talk about.

“I was a diploma student then in ABU in 2010, now I have been getting random calls threatening me, I just switched off my phones and I want to continue my protest, that is all”, she said.

Bello’s protest earlier, forced authorities of the university to suspend the lecturer and constitute a committee to investigate him.