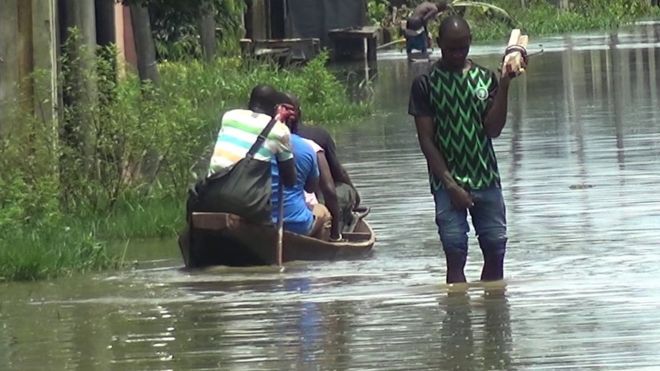 Residents of Isheri North Government Reserved Area, also known as the Isheri North Residential Scheme, Lagos State, are currently lamenting the flooding of the area, located along the Lagos-Ibadan Expressway.

The residents appealed to the state government to come to their aid, stating that since the flooding started in late August, many residents had been forced to leave their homes, while those remaining in the estate now use canoes to move to and fro their homes.

When our correspondent visited the estate on Thursday, floods could be seen taking over most homes and roads, with cars abandoned on the road and some residents forced to wade through the floodwaters.

A building materials dealer who owns a shop around the area, Mr Oluwaseun Onifade, lamented that this year’s flooding was more severe than the ones which occurred in the past five years.

Decrying that the situation was affecting his business, the resident appealed to the Lagos State Government to come to their aid.

He said, “The situation is affecting my business as a supplier of building materials. There are some estates we cannot deliver goods to because everywhere is flooded.

“In a week, we usually sell between 300 bags and a truckload of cement but throughout this week, we’ve been unable to sell 50 bags. You can’t enter the estate even if we have orders. Canoes are used in some places.”

Our correspondent also saw as some vehicles that broke down in the flood were being towed out of the estate, while some residents could be seen moving out.

Another resident, Mrs Bunmi Awosanya, said due to the flooding, she and her family had vacated their house on Saturday.

“We have moved out of our home, the situation is worse than expected. We had to abandon everything in the home – furniture, electronics and other expensive items.

“Right now, we have run for our dear lives. Every room in our home is flooded. Our street in the estate is flooded. We were making use of canoe but the situation has gone beyond using canoes now,” she said.

It was also gathered that some residents who have vacated the estate reported seeing reptiles such as snakes in the flood that took over their homes.

One of the residents, Mr Yinka Olumuyiwa, also vacated the estate on Saturday, saying he was tired of the situation.

Olumuyiwa said, “My vehicle broke down after driving it through the flood. As you can see today (Saturday), the flood has also taken over the major road in the estate.

“I have been using a canoe to enter my home but my home is now flooded, so my family and me have vacated to a friend’s place until when the floods subside.”

Speaking to our correspondent, the Estate Manager of the Isheri North GRA, Mr Martins Badejo, decried that despite writing letters to the Lagos State Government to come to their aid, nothing had been done to assist them.

Badejo attributed the flooding of the 300-home estate to the overflowing of the Ogun River as a result of the opening of the Abeokuta Dam in Ogun State and the Asejire Dam in Osun State.

He said because the estate was about 0.9m above sea level, the area had always become prone to flooding every year the dams were opened. He said this year’s flooding was the worst residents had witnessed.

He said, “Everywhere is flooded. We have over 300 buildings, including uncompleted ones in the estate. At areas in the estate where floods have not affected, the drainage is already filled up and we are expecting them to be flooded too any moment from now.

“Many residents have been displaced; we have those who have moved out of their houses for almost a month and right now, we have deployed three canoes in some parts of the estate to carry residents who are still around in and out of their homes to the major road. The situation is depressing.”

Badejo said apart from the displacement of residents, the floods also constituted health hazards because the waters were acidic and salty, lamenting that residents’ cars were breaking down after coming out of the waters.

“We’ve been having this bad experience in the past three weeks. It’s a sad situation and we need government’s intervention urgently. We appeal to Governor Babajide Sanwo-Olu to come to our aid,” he said.

The estate manager said although the residents were erecting an embankment (retaining wall) at the end of the Ogun River to fend off the waters, the project had stalled due to limited resources.

Badejo also said residents had dredged a 2.5km canal in the estate and raised the drainage by 12 inches. Despite all these, he lamented that the problem had not been totally resolved, noting that some residents had been forced to sell their land and houses in the estate.

“At the end of the day, the buyers of such land and buildings have also regretted it and got frustrated. There are many abandoned houses. Sometimes, some landowners want to start building but then the floods will come and they will get discouraged.

“At one of the blocks, a house has been completed and furnished but the owner cannot move in because of floods. It is saddening,” he said.

The residents called for government’s involvement in the dredging of the Ogun River from Abeokuta and the construction of an embankment or sand dunes along the river bank to prevent flooding in future.

The Director of Services, Ogun-Osun River Basin Authority, Mr Femi Dokunmu, said the flooding in the area was because of heavy rainfall this year, necessitating the release of water from the Oyan Dam.

He said residents of the area would notice they didn’t experience flooding in the past six years because rainfall was not heavy during those years, unlike this year.

Dokunmu stated, “Where they built their houses is a flood plain, meaning no amount of water released from the Oyan Dam into the Ogun River would go above places that are not flood plains.

“When there is heavy rainfall and much water is flowing into our reservoir, we have to release it so that the dam will not get damaged. It is the rainfall in the northern parts of Ogun State that is responsible for the situation.”

Asked if an alert was issued to the residents that the dam would be opened because of heavy rainfall, Dokunmu replied, “They should simply understand they are living along the flood plain. If there is heavy rainfall in a year, they should get ready for flooding whether we release water from the dam or not.”