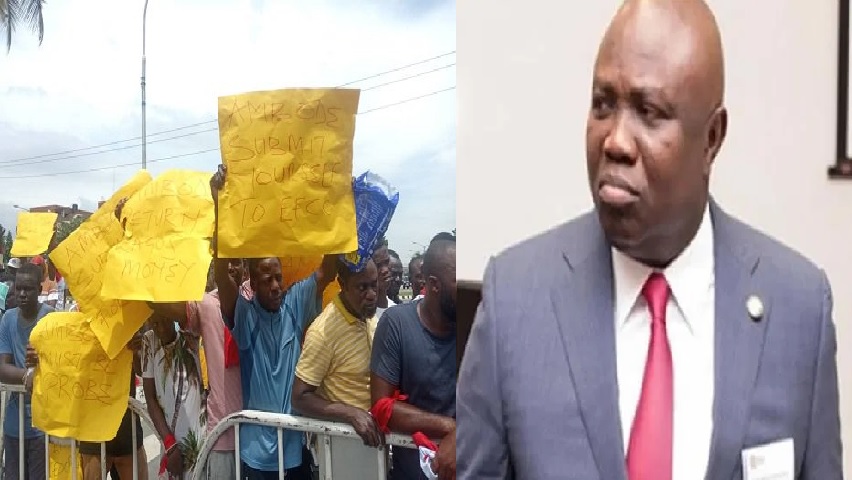 SCORES of protesters under the aegis of Lagos Youth Vanguard (LYV) on Tuesday protested at the Lagos State House of Assembly complex demanding the probe of former governor Akinwunmi Ambode.

The protesters, who chanted solidarity songs, were led by the Patron of LYV, Mr. Rasak Olokooba, and the President of the Group, Mr. Ibrahim Ekundina.

Some of the placards carried by the protesters read: “Ambode, submit yourself for probe,” “Ambode must be probed,” “EFCC, do your job.”

The LYV stated in its leaflets distributed to journalists that Ambode “deliberately laid landmine through the obvious improper, inappropriate and insufficient content in his handover note that should serve as a guide to the incoming administration in the tradition of every civilised public officer.”

The group accused Ambode of flouting official procedures, saying that he refused to abide by the procurement laws.

He was accused of wrong priority in policies and programmes as well as abandoning the track that could bring about development in the state.

The LYV said: “We call for his probe and investigation with a view to apportioning appropriate penalties.

“We want to assure the good people of Lagos State, and all the people that care about Lagos that we will continue to pursue every legitimate means until justice is done.”

The group’s Patron Olokooba said it was good to be fair to every administration.

Olokooba added that they had watched events for 90 days and that there were clear indications that the former governor had been making attempts to sabotage the current administration.

He said: “For every government that is going out, you leave a template for the coming government to succeed. Ambode handed over a very rickety handing over note that cannot assist the current administration.

“If you go round the state today, you will see that there is no governor that would inherit such state and the people of the state would be happy with him, but thank God the goodwill enjoyed by Governor Babajide Sanwo-Olu is still intact, if not, by now the people of Lagos State would have been complaining bitterly.”