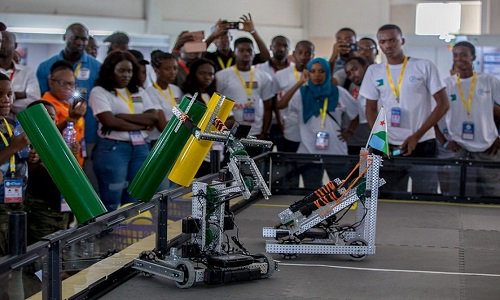 Six Nigerian students who will represent the country at the Africa Robotics Challenge (ARC) in South Africa on September 28 have cancelled their trip to the country over safety concerns.

The students announced cancellation of their trip at a media briefing on Monday in Lagos.

They said the organisers had failed to guarantee their safety throughout the duration of the competition.

The students are: Tirenioluwa Shobande, 18, a 100-level Systems Engineering student of the University of Lagos (UNILAG); Ifeoluwa Aigbiniode, 15, of Yaba College of Technology Secondary School and Jeffrey Nwafor, 15, of S-TEE International School.

The National Coordinator Mrs Remi Willoughby said the organisers had informed her of their inability to provide tight security and guarantee the safety of the students while in South Africa.

Mrs Willoughby said the organisers hinted that while in South Africa, the Nigerian competitors would neither disclose their nationality nor be able to go out for sight-seeing for the duration of the competition.

According to her, the host said the event will not be given publicity and that no one else will be invited to witness the competition.

“We planned to go to South Africa for this robotics competition, which is basically supposed to be for few African countries and would have held on September 28.

“However, we will not be attending because of the situation in South Africa currently.

“And the fact that I cannot personally guarantee the safety of the students while there, and with our host telling us that even if we come, it will not be announced.

“That we have to come quietly and we will not wear our Nigerian T-shirts and that the bus that will convey us will not display our logo of Green, White, Green! So, how can we proudly showcase our country?”

Also, Science and Technology Minister Ogbonnaya Onu on Monday said Nigeria must provide the needed leadership for the liberation of Africa, despite the recent xenophobic attacks on foreigners in South Africa.

The minister spoke at the opening of the sixth Nigeria Movement of Solidarity with Cuba meeting in Abuja.

The event was organised by the Nigeria Labour Congress (NLC), the Trade Union Congress (TUC) and a coalition of other popular groups.

Onu recalled that Cuba had made efforts in the past to help African countries in their time of need.

The minister said Cuba, during the Ebola pandemic, sent about 400 doctors to African countries to curb the spread.

He urged Nigerians to imbibe the culture of patriotism and self-reliance.