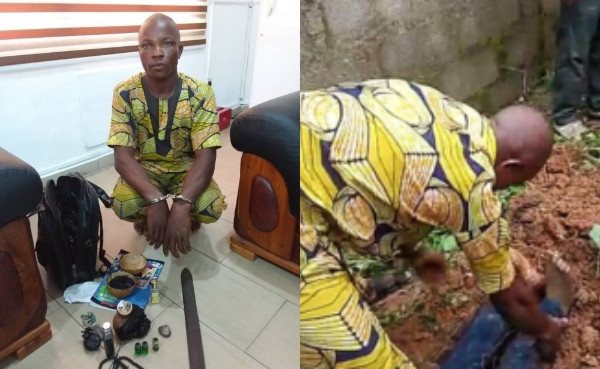 A welder identified as Tunde Tayo who killed a commercial motorcyclist and reportedly removed his vital organs including his intestine for rituals has been arrested by the Niger State Police Command.

The suspect who was arrested beside the shallow grave at his residence situated in Ungwan Roka, Maitumbi, a suburb in Bosso Local Government Area of Niger state where the headless body of 25-year-old Abdullahi Sale was recovered.

Tayo when paraded before newsmen on Saturday, September 14 confessed to the crime.

“I beheaded and removed Sale’s intestine for ritual purposes. I even buried him in a shallow grave near my house” he disclosed.

The father of five was arrested by the police prior to reports from neighbours about the newly dug grave close to his house.

The Police Public Relations Officer (PPRO), Muhammad Abubakar, said the suspect admitted to the crime after everyone in the house was arrested after the headless body of the okada rider was exhumed.

Tayo who said he committed the said offence because his returns as welder could not sustain his family of seven, will be charged to court when investigation has been concluded.