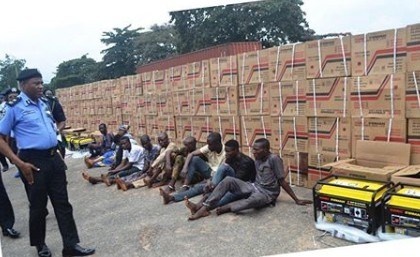 These suspects were arrested by SARS operatives after hijacking the trailer loaded with the goods at Akinyele Area, along Ibadan/Oyo Expressway. While parading the suspects at the Police headquarters in the state, the commissioner of Police, Shina Olukolu stated clearly as follows;

“Based on credible information that some notorious hoodlums who specialized in hijacking and diverting trailer loaded with goods on the highways had highjacked a Mack trailer loaded with new SUMEC portable generators at Akinyele Area, along Ibadan/Oyo Expressway, and diverted the goods valued about Forty million (N40m), to an unknown destination.

The receiver of the stolen goods who claimed Wasilat Taiwo, claimed not to know they were stolen goods. She however disclosed that she was promised N1m if the business works out.

“They told me that the goods was oil, and I will be giving one million naira if the deal works out, am a provision seller, am not selling generator” she said.

The truck driver Sarafadeen Abiodun, also admitted being promised N1m on completion of sales of the generators and engine oil loaded from Lagos and expected to be delivered in Port Harcourt, Rivers state capital.