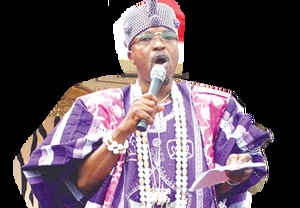 Oluwo of Iwoland, HIM Oba (Dr.) Abdulrosheed Adewale Akanbi, has declared readiness to lead a national protest against ritual killings and corruption in the country.

He lamented the impotency of government at tackling ritual menace, stating that ritual killing is prevalence but deadlier than kidnapping.

Oluwo stated protection of lives is the primary responsibility of the government, noting such can be credited until ritual killings is checkmated by the present administration.

He equally vowed to declare an open protest against corruption characterising public officials in Nigeria.

According to a statement by the monarch’s press secretary, Alli Ibraheem, Oluwo called for enactment of strict penal system against human ritualists and corrupt individual to safeguard human and protect their lives.

“It is saddens no attention is paid by the federal government to prevalence ritual killings pervading our country.

Thousands fall victim of ritual on daily basis but regrettably, no one condemns such. I’m not happy with the neglect of my outcry on daily killings of my sons and daughters by ritualists.

These people are deadlier than Bokoharam and kidnappers. I will lead thousands of Nigerians with like minds on national protest against human ritualists and corrupt individual.

“Right now, as I’m talking, evil men are somewhere killing human for rituals in the name of money and promotion. Few relate offering human for sacrifice as culture, no, it is an aberration to every culture. No culture accepts human as sacrifice ” he said.